Builtin batteries in gadgets have some advantages: they have more power and capacity, they last longer and they are usually lighter than replaceable batteries. But they have a huge disadvantage as well: when they are empty you're out of power until you are back at home to charge them.

Foosel found a solution for this problem: a simple battery box to attach to any USB chargeable device. When I first saw it, I knew I needed to have one my self. 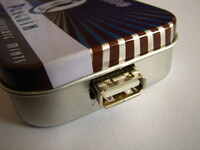 The idea is simple. Use two standard AA batteries and some electronics to power your device through an USB cable. The electonics are needed to convert the 3 Volts of input delivered by your batteries to the 5 Volts wanted by the USB specs.

This weekend I went to a local electronics dealer and bought the necessary parts (I had the needed tin already).

Unfortunately I have no knowledge of electronics whatsoever, so I was doing a blind flight there. I assembled all the parts as shown in Foosel's circuit plan. But when I checked the output voltage, my multimeter showed 55 Volts instead of the wanted 5. I was lost. 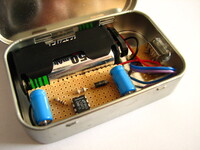 Luckily Foosel was nice enough to have a look at a few images I sent her and quickly found the problem. I had bought a different version of the DC/DC converter. Like hers, mine was labeled LT1073 but while she used the CN8 version I had bought the CN8-5. From what I understood from her explanation, my version had the functionality of two resistors used in her original circuit already built in. So the solution was to remove those two resistors.

I did as told and finally got the correct output voltage

. Here is a photo of my final box with the new circuit plan as overlay. 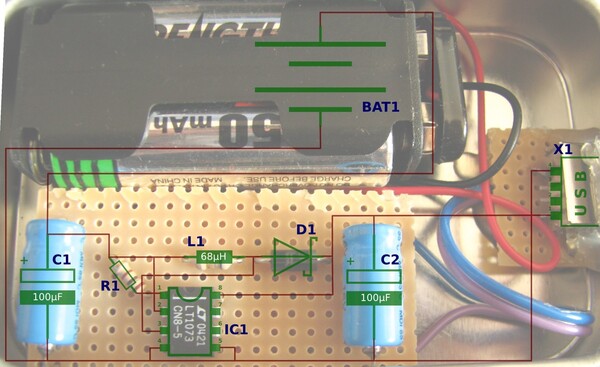 Here are the parts I used (see Foosel's list for Reichelt IDs):

There were some things which took me a while to figure out.

There was no mark about the cathode and anode sides of the capacitors – I finally found the data sheet for them. The positive pole is where the dent is – this might be an obvious standard, but I didn't know and couldn't find any info about it.

Be sure to attach the positive pole and ground to the correct pins of the USB jack. If done the wrong way round, your devices will not recognize the power source. Refer to the pinout on the right.

Make sure your contacts below the board will not touch the metal of the tin. I mounted the board on some pieces cut from a wine cork using two component epoxy glue. The hole for USB connector was cut with a dremel, the connector it self was fixed with hot glue.

My board layout could probably be much tighter. From what I learned later it is very bad style to attach parts diagonally.