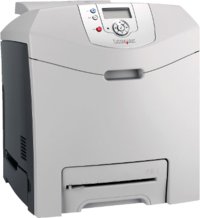 My new printer arrived today. It's a Lexmark C530dn, a color laser printer with a lot of features for a reasonable price.

Since it has a built in network port and supports a variety of printing protocols, getting it up and running shouldn't be a problem. In theory.

Lexmark ships a CDROM with the printer containing the usual Windows software stuff and the manuals. But there is some Linux software as well! Unfortunately it's some special “lexprint” utility and it's for Debian and Redhat only.

I don't run Debian anymore and I don't need any X tool anyway, because I already have a very powerful printing system called CUPS. So here is how to get the printer up and running using CUPS.

If you haven't installed it yet do so using:

Next, set up the printer to use your network. This can be done directly at the printer using the front panel keys and the little LCD screen. It's straight forward, setup a static IP or make it use DHCP.

When done, you can already configure the printer via HTTP, just access it on the IP address you just selected.

Next step is to make your local CUPS use the printer. Access the CUPS admin GUI via http://localhost:631 and select “Add Printer”. Enter a printer name and click “Next”. Now choose the “Internet Printing Protocol (IPP)” from the list of protocols. The address is ipp://<yourprinterip> using the IP you set up earlier.

The next step expects you to choose a known printer manufacturer or to upload a PPD. Since Lexmark isn't in the list we need a PPD. But there are no PPD files on the CDROM and there are none to find at lexmark.com nor even at ftp.lexmark.com.

If you google a bit you will find a generic PostScript PPD for the printer at openprinting.org. But since we have nearly the same printer at work I *knew* official PPDs made by Lexmark exist.

AFAIR they were included on the CDROM of the printer we have at work. But where are they? I quickly logged in at work and checked the file server, luckily we kept the the original archive there. Knowing the filename, I asked Google again and found a working download source for you to use. Just download and extract the files:

Then use the ppd_files/UTF-8/en/Lexmark_C530_en.PPD1) in the CUPS setup page.

Your printer is now ready to be used with all bells and whistles.

I wish Lexmark would just put those PPDs on the CDROM as they used to do.

1)
or your preferred language