Three Things I didn't knew about the Space Shuttle

Just three little things I learned because of all the attention the last space shuttle launch provoked in the media: 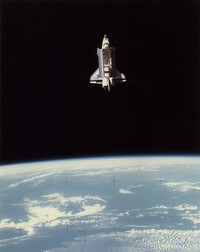 1. The big thing between the solid fuel boosters is a not a rocket but a tank. It powers the three jet engines at the rear of the shuttle. Once the tank is detached these jets don't do anything.
Yes, this is somewhat obvious when you look closely, but somehow I never did. Or maybe I was too familiar with the Russian Buran which was indeed carried by a huge rocket.

2. One of the first thing the shuttle has to do in orbit is opening its cargo bay. The radiators on the inside of the cargo bay doors are the only way to cool down the system. Failure to do so means immediate mission abort and return to earth. But as far as I know this never happened.

3. The launch pad has some sort of rope suspended emergency slide leading into a bunker below the pad for last minute escapes from the shuttle. Again this was never used but trained for by all astronauts.

For those who have seen the Earth from space, and for the hundreds and perhaps thousands more who will, the experience most certainly changes your perspective. The things that we share in our world are far more valuable than those which divide us.
– Donald Williams, Astronaut