17 years ago I blogged about…

Nearly a year ago I wrote about someone who spammed the del.icio.us frontpage by resubmitting his site again and again. The folks at del.icio.us fixed this by changing how submitted links go the frontpage (I think). But now someone found a new way to spam del.icio.us in an even worse way.

Many people (including me) subscribed to the RSS feed of the del.icio.us popular links. Links which get bookmarked by many different people in a short time are considered popular and put on this page. Obviously the simple idea of the spammer is to create a few dozen accounts and then bookmark the same link from each of them (probably automated). 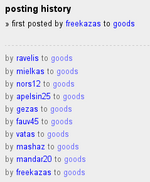 The link becomes popular and is clicked in RSS readers all around the world. Very sad. This will render such a good service pretty soon useless.

I fear we will see more of this. A del.icio.us popular link brings a few thousand visits on one day in my experience. Imagine what happens if someone uses the same method to promote his spam URL to digg's frontpage: It would give a spammer possibly a few ten thousand visits even if the link is quickly reported. I'm not sure if is so simple in digg, they probably have some throttling before promoting a story, but you get the idea.

Social Web 2.0 sites seem to be the next big spam target.