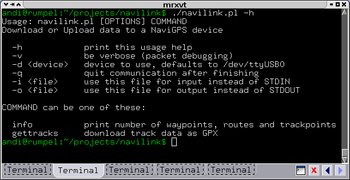 As you already know, I own a NaviGPS with which I'm very happy. There was only one dark spot: no Linux support. Locosys (which seems to be the real manufacturer, the device is branded by different companies) provides a utility to down- and upload tracks, routes and waypoints for Windows only and my previous attempts to understand the protocol weren't successful.

But yesterday I received a PDF document from Roger Liou at Locosys who saw my previous work at my Wiki1). The document contained the specifications of the NaviLink protocol.

With this kind of help I were finally able to write the first version of a Perl NaviLink client today. While doing so I discovered quite a few errors in the document, so I transfered the contents to a new Wiki page while fixing some of the specs. There are probably some more errors in it, because I haven't implemented the full protocol, yet.

Anyway, for everyone who wants to try it, here is the script:

It's a single Perl script only dependent on Device::SerialPort. It's licensed under the BSD license, so feel free to do whatever you want with it.

Currently only tracklog downloads are supported. Feel free to improve the script by sending patches

Update: I added a few more modes. The link above always points to the most up to date version, before sending any patches make sure you have a recent release.

Update 2: The script now has a proper project page. Uploading waypoints is finished as well.

1)
well, I received it from Marcel who Roger obviously thought to be responsible for the mentioned Wiki page