After many months of playing DS games only, it was time to feed my Wii again.

Kaddi and me went spontaneously to the next electronics dealer to get a new game. We decided on Super Mario Galaxy which received excellent reviews in the last weeks.

To say Super Mario Galaxy is a Jump'n'Run is an understatement, but it's probably the best fitting category. The story is like in every Mario game. Princess Peach was kidnapped by Bowser and Mario is on his way to rescue her. This time her majesty is abducted into space. With the help of some mysterious girl and her little star creatures called Luma, Mario needs to explore various galaxies. Each galaxy hides a Power Star needed to power the girl's comet starship. During your adventures you can collect “star dust” to use as ammunition, to earn additonal lifes and to buy powerups.

The galaxies are all differently themed. There are bee planets with large flowers, there are spooky castles, there are underwater worlds, there is every thing you can imagine or not. Each world has it's very own types of puzzles and ways to solve them.

The most special thing about this game is the playful way it deals with gravity. Many levels contain only small planets, rocks or platforms floating in space. Each has its own gravity. For example you can simply walk around a platform, turning Mario to walk upside down on it. Sometimes you can even jump from on planet's gravity field to the one of another. In other areas the gravity can even be reversed by hitting switches.

This sounds complicated but isn't. The controls are always intuitive to use and even I am (mostly) able to control Mario safely through the colorful worlds

. Mario's direction movements are controlled by the Nunchuck's control stick (similar to Zelda) while the Wii Remote is used for jumping (A), shooting (B), attacking (shake) and collecting “star dust” (pointing). 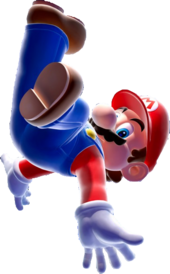 Though the game is strictly spoken a single player game, it can be played by two players. This is called “Co-Star Mode”. The first player continues to control Mario. The second player can do supportive actions like collecting “star dust” and freezing opponents by pointing at them. It doesn't sound like much, but makes playing the game a bit easier. And Kaddi loves to play that part

. There is no Nunchuck required for the second player.

I'm usually no fan of Jump'n'Run games. Simply because I suck badly at them. I don't know if I ever saw the third level of the original Super Mario World. Super Mario Galaxy is different. I wouldn't say it's easy but it is manageable. And you always have enough lives to retry a level.

Summary: Super Mario Galaxy is a fun, colorful and inovative game suitable even for the occasional Jump'n'Run gamer. Kaddi and me just spend the whole Sunday in font of the TV playing