DokuWiki of the Month: Atheists of Utah

This article is part of a monthly series.

Every month I present a DokuWiki powered site which is special for its design, content or clever use of the software. To give you a first impression on what the site is about I'll send a short, interview style questionnaire to its creator. 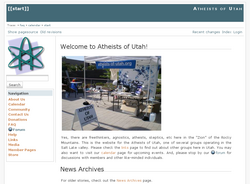 In previous articles of the series I mostly picked big wikis, which often were heavily customized. This month's pick shows how DokuWiki can easily be utilized for a small group without the need for any code modifications.

On Atheists of Utah, DokuWiki provides a simple way to manage a local organization. I know of multiple churches who use DokuWiki in just the same way, but picking an Atheist group did appeal more to me. Your mileage may vary

Questions were answered by the site's webmaster Russell Martin.

Can you give a short introduction on what your wiki is about?

Our Wiki is used to promote our organization, Atheists of Utah.

Since when is it online?

Why did you chose DokuWiki? Did you try other software before?

I chose DokuWiki because I was looking for a wiki that didn't require a database back end. That was the principal reason, however, there were other things I liked about it.

Before DokuWiki, I had been running a site using MediaWiki for several years. I like MediaWiki, but I always felt like it was a bit unruly and that there were administrative features that were constantly requiring me to SSH into the server and edit config files with vi. To contrast, I felt like DokuWiki was more streamlined and that nearly all administrative tasks can be done from within the wiki itself. I'm a big fan of Mac OS X and I felt like that DokuWiki was more OS X like and that MediaWiki was starting to feel like Solaris. Both very good OSes, but one lets you get things done without constantly getting in your way and one is constantly making you work in a much geekier and convoluted fashion.

Did you do any modifications to the software?

Who is editing the site?

We started out allowing anyone who would sign up for an account to edit pages. We experienced problems with that and now it is a closed site with accounts created by request. Only members of Atheists of Utah are eligible to get an account.

Brag about your statistics ;-)

Our statistics aren't really much to brag about. Our page hits on a monthly basis are quite low actually. However, since January, we have managed to go from being invisible on Google to being within the top 4 results returned when searching using terms like “utah atheists” or “utah atheism”, and if you put the “atheist” or “atheism” term before “utah” and search, we're usually the top result returned. This has helped people here find us and show up for meetings, especially the Thursday night coffee chats. If you ever happen to be in Salt Lake, please come and see us at one of these.

Is there anything else you want to tell about your wiki?

No, not really. I would just like to say thanks to you for making DokuWiki. I used to run a site for a Unitarian church using traditional methods like editing static pages and then uploading them via ftp and once I discovered wikis, I've never looked back. They are such a great way to let several people simultaneously update content on a community oriented site.

If you know of a DokuWiki driven site which is somehow remarkable and should be featured as DokuWiki of the Month, drop me a mail or leave a comment, please.