I spent most of yesterday night and today with playing two old fashioned but wonderful point and click adventure games by Zombie Cow Studios.

The first, somewhat shorter one is called Ben There, Dan That. It's named after its two protagonist characters who in turn are named after the two developers who created the game.

After the Ben and Dan return from some adventure, they discover that their TV antenna is broken. On trying to repair it they are abducted by aliens and need to puzzle their way home through various hilarious dimensions. The games makes various references to classical Lucas Arts adventures, Internet memes and made me literally laugh out loud multiple times.

The full game can be downloaded for free and is good for a couple of hours of fun.

When you finished “Ben There, Done That” and liked it, you will not think twice about buying the sequel called Time Gentlemen, please. It costs about 3.50€1). It took me about 6 or 7 hours to complete – excellent value for the price of a coffee! 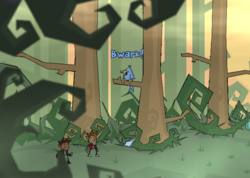 The game picks up where the first one ended and sends the two heroes through a complex time travelling adventure. Graphics are slightly better than in the first part, but its wit and story what makes these games so much fun anyway.

Some puzzles in this one reminded me of the ones in Day of the Tentacle. Eg. you need to change things in the past to solve a problem in the future. But don't get me wrong, “Time Gentlemen, please” is no lame copy of old classics, it's an excellent game on its own. Oh and if you're still not conviced: you will fight Cloned Nazi Dinosaurs

PS: Both games are Windows only unfortunately.

1)
You can optionally pay the same amount again as way of saying thanks for the first part.