More than three decades after my first visit, I finally found the Secret of Monkey Island™.

Return to Monkey Island picks up right from where Monkey Island 2 ended in a quite clever way. It is filled with absurd, but never illogical puzzles, brings you back to many familiar but also many new places, let's you meet old and new characters and is just a wonderful nostalgic game. I can wholeheartedly recommend it to any fan of the series.

I think it Ron Gilbert and Dave Grossman did everything right with this game, walking the thin line of catering to the expectations of decade-old fans while still creating a very modern adventure game.

Ron has written several posts over the last years about how a modern adventure game should work and I definitely think Return to Monkey Island is the culmination of this.

One aspect of that is the controls. I would never had dreamed that playing a point-and-click adventure on a controller would feel natural, but I did play the game exclusively on my Steam Deck and it was perfect. RtMI uses interaction spots: when you walk close by, they are highlighted and up to two interaction possibilities (roughly describable as “examine” Ⓐ and “use” Ⓧ) are shown, the shoulder buttons let you cycle through multiple close-by hotspots. Ⓨ opens the inventory which has “grab” Ⓐ to pick up and use items and Ⓧ is used for closer inspection. You don't really need anything else and makes the game easy to use with a game pad. 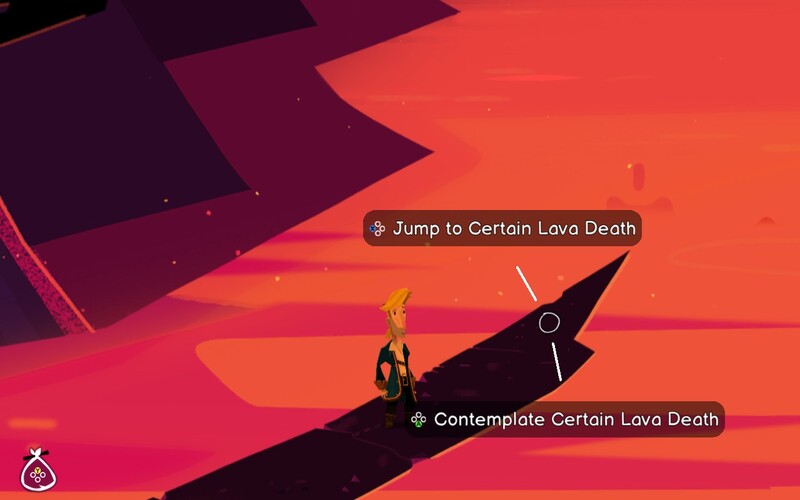 Another aspect Ron often talked about, is having a built-in hint system for when you get stuck. RtMI uses a Voodoo book of hints, which instead of spoiling the solutions for you, will nudge you into the right direction. I really liked this and used it a couple of times when I did get stuck. Though in most cases, Guybrush's auto-updated todo list was enough to remind me of open ends I hadn't explored, yet.

When the trailer was released, a lot of people hated the new graphic style. They would have preferred a retro pixel art style like Ron did for Thimbleweed Park. But really, I liked the artwork. Yeah, the nose style is a bit weird, but overall that doesn't really matter. It's a modern, cartoony style and brings the Caribbean pirate feeling across. And IMHO that's all that counts.

It took me about 12 hours to play through the game which is a decent length, even though I'm sad its over already. Maybe I should finally give the special editions of Monkey Island 1 and 2 a try.

Oh and of course I have to mention the ending. It was a bit weird at first, but then I realized that the Secret of Monkey Island was…