8 months ago I blogged about…

It now has been a month of owning a Steam Deck. Time for a tiny little review. 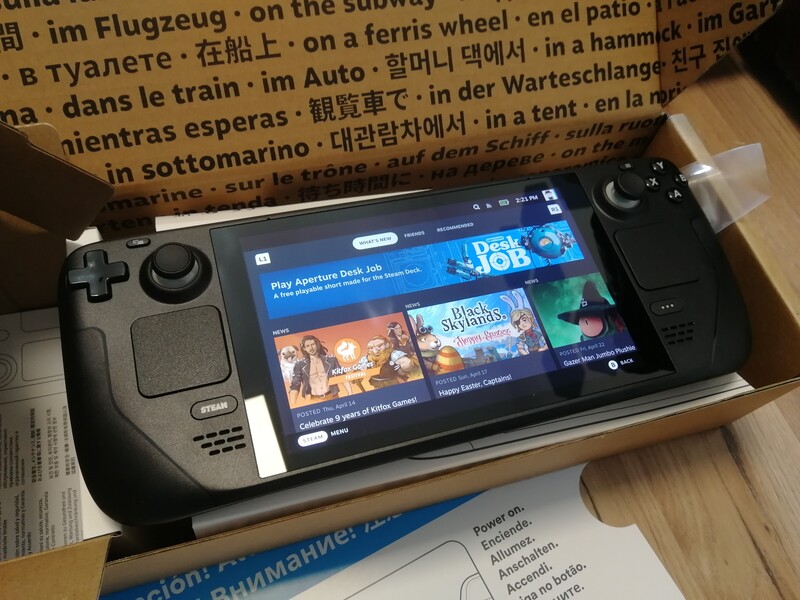 For those living under a rock (or are simply non-gamers): the Steam Deck is portable gaming console. However unlike other popular portable consoles like the Nintendo Switch, this is basically a PC under the hood. It runs SteamOS - a Linux system made for playing PC games. And since most PC games only run on Windows it comes with it's own Windows emulation layer called Proton which is based on good old Wine.

So yes. This is a handheld system that let's you run most of the games you already own.

I bought the medium sized version with 256GB builtin NVMe storage for 550EUR.

The reason I decided to buy it was simple: I love gaming but I also have reoccurring back pain. Sitting for prolonged times is bad for my back. While working, my standing desk helps, but gaming while standing just doesn't work for me. With the Steam Deck I can game while lying down.

So far I'm loving it. I'm working slowly through my Steam Library back catalog, trying games I had bought in bundles but never actually played so far.

All these games work perfectly on the Deck. Only for Dorfromantik I had to fiddle a bit with the controls.

Of course none of these are recent Triple-A games that require the latest and fastest hardware. But I don't really need that.

Naturally there are also a few things I don't like:

Anyway, I am happy with my purchase and would recommend the Steam Deck.