7 months ago I blogged about…

While the pandemic isn't over, it seems to have become somewhat manageable for now thanks to vaccines. And that means that occasional office commutes become more common again. And commutes need headphones.

My old Philips Bluetooth headphones are dissolving, so I need a new pair. And why not go a little fancier and have Active Noise Cancelling (ANC), too?

My wife has had the Sony WH-900N model for years and the ANC did really impress me back when she got them. So my first instinct was to buy a follow up model. But in the end I wasn't convinced I made the right choice. So I ended up ordering four different models to be able to compare them all. And to write a blog post of course… 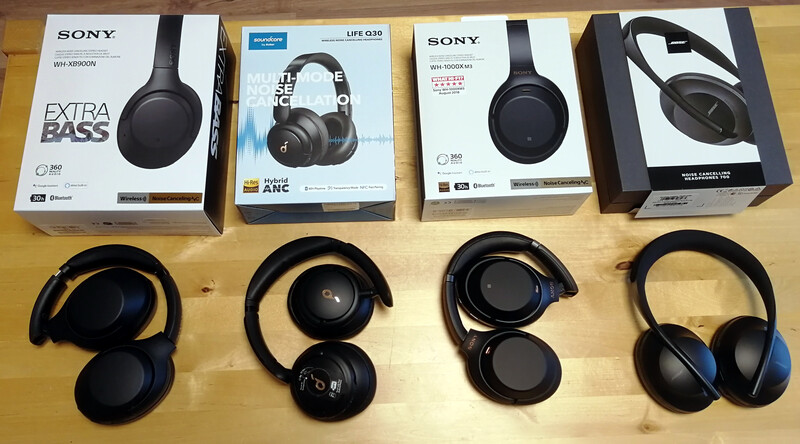 Before we look at the different models, let's talk about a few general things first.

I am not an audiophile. I mostly listen to punk music, so I am far from qualified to judge audio quality. What you find below is my subjective feeling about what I heard when listening to the Diva Dance from the Fifth Element soundtrack. In general all four headphones sound totally okay to me.

I was mostly interested in the noise cancelling abilities. And that's also where the models differ the most. Kaddi complains most about loud wind noises when she uses her headphones outside. The ANC seems to actually increase the wind sounds. So to check for that, I used a table fan and sat right in front of it to compare the wind sounds with the headphones on and off. I also used the sound of the fan (this time turned away from me) to judge how well the phones block monotonous noises (like on a plane).

I don't take an airplane to work, so a more practical question is how well it blocks people talking. For that I turned on parliament TV and tried how well the phones blocked the voice of the speaker. If I can not understand the words anymore, they won't distract me.

All ANC testing was done without actually playing any music.

For trying how the headphones fare as headsets, I called Kaddi via Whatsapp Video Chat in another room while the TV was playing a cooking show right next to me. I was interested how well the TV would be blocked.

All testing was done by pairing the headphones with my Honor 9 phone. I didn't use any apps by the manufacturers.

All tested headphones paired without problems and fit comfortably on my head and over my ears (YMMV).

I didn't want to spend too much. Certainly not more than my phone costs. So these are all under 250€ and thus are not always the newest model of the line or even the high end product the companies have on offer. I basically picked what had good ratings on Amazon and was still priced at something I might consider to spend.

And yes, nobody paid me for this review1) and I will pay for the winner out of my own pocket while all other models go back to Amazon2).

These were the ones I bought first. They're comfy and work well enough, but their ANC made me wonder if that's really the state of the Art.

Just like Kaddi's old model, they pick up wind and actually make it louder. They do make the fan a little quieter, but it's still audible. But the ANC does not introduce any base noise, so that's good. Voices are barely blocked. They get a little quieter but are still quite understandable.

During the phone call, my voice was well understandable with reasonable quality. However whenever I stopped talking, the TV voices were picked up instead and it was very distracting for Kaddi.

The XB900N announce “Extra Bass” on the packaging and from all the models tried, they seem to be the most bassy indeed. Personally I like that, but it makes the other frequencies sound a little more low as well.

They have dedicated Google Assistant and power buttons and use gesture control for everything else. The gestures generally work fine, though sometimes you trigger “next” instead of “louder”. What I really like is the transparency gesture: by cupping the whole right speaker, ANC is turned off, music volume is decreased and the environment is filtered through. Ideal to quickly answer someone's question or listen to a train announcement.

Accessories are a fabric bag, an AUX cable and a short USB-C cable. The latter being used for charging.

Anker is a well known brand for battery packs. But they also have a audio line called Soundcore.

I bought these because I wondered how much better the Sony XB900N are at ANC. The answer is not much.

The ANC in the Q30 is close to the Sony XB900N. Wind is actually less of a problem, it's still very much audible but at least it seems not to be increased by the ANC. The fan noises get quieter but are still audible.

Blocking voices OTOH is actually better than what the XB900N do. Voices become considerably quieter but are still understandable. Some slight base noise is audible when no music is playing.

The phone quality about the same as the XBN900N, with the same problems of picking up ambient noises as soon as I stopped talking.

Of course the features are not on par with the drastically more expensive headphones. Nearly everything is controlled by physical buttons: power, ANC, volume, play/pause. Gesture control seems to be used for only one thing – enabling the transparency mode. However switching to it feels less instant and natural than with the Sony.

Unlike all the other headphones, the Anker has no support for Google Assistant.

The headphones sit comfortably, but are just barely large enough to cover my ears.

Accessories are a hardshell case and a tiny fabric bag with AUX and USB-C cables.

This is the big brother of the Sonys further up and on a first glance look nearly the same.

But they are considerably more expensive and that premium price mostly comes down to massively better ANC.

Wind is still audible but is no longer amplified by the noise cancelling. The sound of the fan is reduced to a whisper and voices are barely audible anymore. There is no base noise when no audio playing. Overall they have the best noise cancelling of the tested headphones.

The headset feature was also much better than in the other models. Ambient noises from the TV were actively filtered for Kaddi as well making it a distraction free call despite the noise right next to me. Impressive.

Everything else is basically the same as with the XB900N. The same buttons and gesture control. However they seem to be little bit lighter, maybe a result of that missing bass boost.

Accessories are a hardshell case, AUX and USB-C cables and a plane adapter.

Bose is known as the market leader in noise cancelling technology, so I was wondering what this barely affordable model could do.

To my suprise, the noise cancelling was actually a tiny bit worse than that of the M3. When no audio is playing there is some base noise audible a bit quieter than on the Anker but still there. Fan noise supression was about the same as with the Sony M3, maybe again a tiny bit worse.

The wind handling OTOH was worse for sure with the noises being slightly amplified by the ANC. Still not as bad as on the cheaper Sony, but even the Anker was better at it.

But where it actually had the best results of all the headphones was suppressing voices. The man on the TV was only a whisper with words no longer distinguishable.

Unfortunately the phone call was a mixed bag. Ambient noises were filtered out nearly completely, Kaddi couldn't even hear the TV playing next to me. However my side of the call was definitely worse than on the M3. The headphones tried to pick up my own voice and send it back into my ears, which is great in theory. In practice though it seemed to have a distracting minimal echo and my S-sounds had ssseveral Ssss too much.

However where the Bose really shines is the overall quality. The metal headband looks much more durable than the Sony - they do sit a little looser on my head though. Also the overall audio quality seemed to be bit crisper (for lack of a better word) than on all the other models.

The bose comes with three physical buttons, two of them unmarked. The Bluetooth button doubles as a power button - a short press is enough for turning the device on and off. The left physical button toggles the ANC between off, half and full. The right button triggers Google Assistant.

Everything else is done by gestures just like on the Sony. However the headband on top of the speaker makes using these gestures much easier. That is because the physical ridge makes it clear what is up and down. What seems to be missing though is the transparency mode the other three headphones have.

Accessories are a hardshell case and AUX and USB-C cables.

If you're on a tight budget, go with the Anker. You get a lot for your money there.

The Sony M3 and the Bose 700 are both very close. And the Bose has the much nicer handling, feel and apparent quality. But in the end, the technology is just a bit better in the Sony, so that's the one I will keep.

1)
I wish
2)
Links are affiliate links though