3 months ago I blogged about…

Over the last weekends we (re)build a deck. Or terrace. Or patio. Or whatever you call it.

The new deck is made from WPC – a wood/epoxy material that is supposed to be more durable than wood.

We ordered all the material online at mondesi.de and used their online planner to roughly calculate the materials we need. They also provided accessories like feet and fasteners. In the end we bought more than we actually needed.

While the material itself was fine, I can't really recommend them.

After ordering we didn't hear from them. Their hotline wasn't reachable and when I wrote an email asking where my delivery is, they replied that they don't know, because that's all in the hands of their logistics company.

The delivery was a joke, too. The delivery vehicle has no way to unload. So we had to unpack the pallets on the truck and unload each plank on it's own. At least the driver was nice enough to help a bit despite not speaking a word of German… for about 200 EUR delivery charges I expected better.

We wanted the deck to be where the old one was, but slightly bigger. The old one was made from poured concrete, so it made sense to keep that. For the parts that had no concrete, I decided to bury some granite stones we had “inherited” from the previous owners. Plenty of water was used to let mud seep between the stones to provide stability. I know that this is not the “proper” way to create a deck foundation but it seems to work just fine. 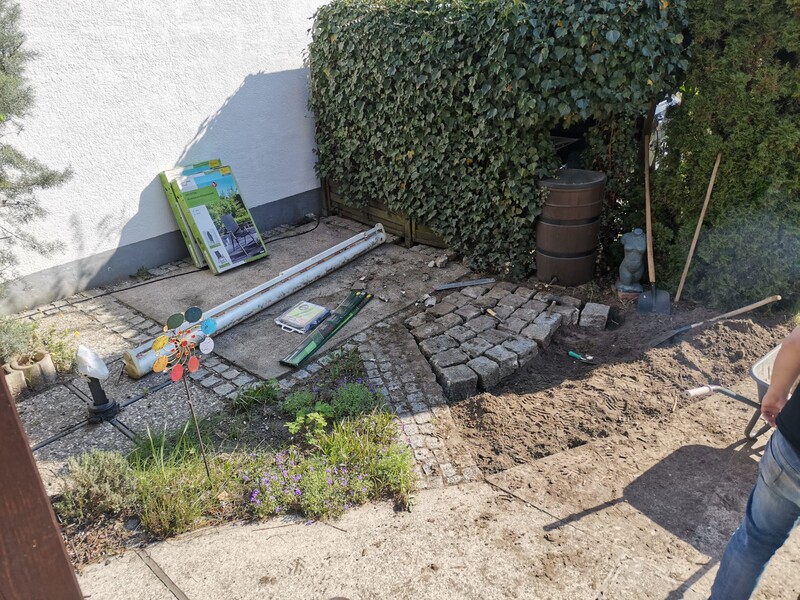 On top of the stones and old concrete, we set a layer of paver stones. I cut some shims from waste WPC to adjust for uneven ground. 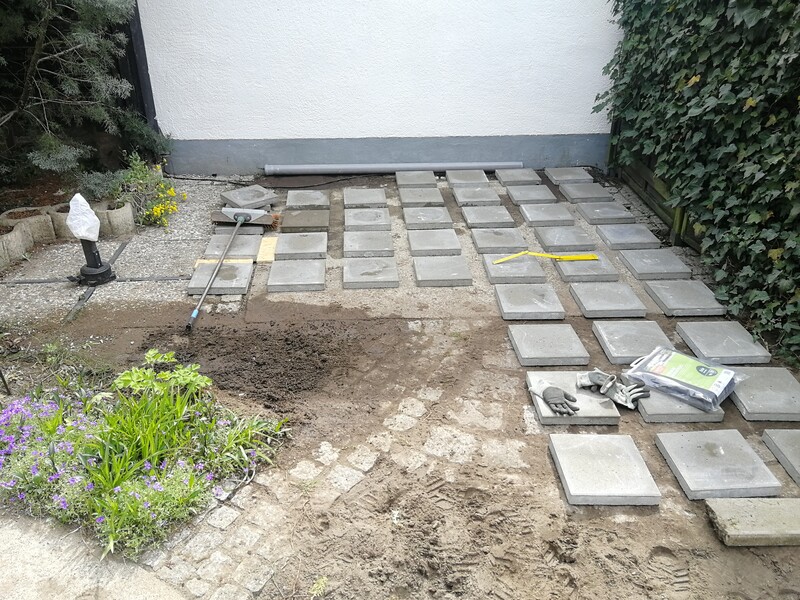 We also added some chicken wire around the perimeter in hopes to prevent any rodents to make our deck their new home - we'll see how well that works. Antiweed fabric was added to prevent growth where no old concrete slab prevents it.

On top of the pavers came adjustable plastic feet. Each of them screwed on with two stainless screws – which required a lot of holes to be drilled. I first tried to use my cordless impact drill but quickly switched to my trusty old wired hammer drill. 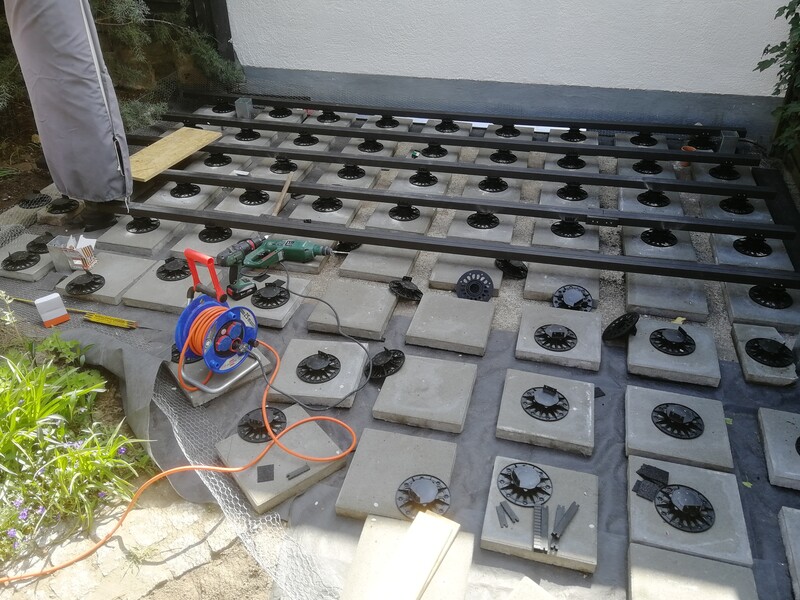 Finally beams are screwed on top of the feet. Using the twist mechanism of the feet you then can start aligning for a slight slope. Once you figure out a system it's not terribly complicated but takes a while.

Adding the planks is straight forward and relatively quick. Each plank is held by little plastic clips between the planks – this way all screws are hidden.

Since we wanted the front of the deck to run in a curve, all boards were left long, hanging over the edge. Of course this means you should absolutely not step on the overhang (don't ask how I know). Adding some very visible tape helped to remind us of that fact. 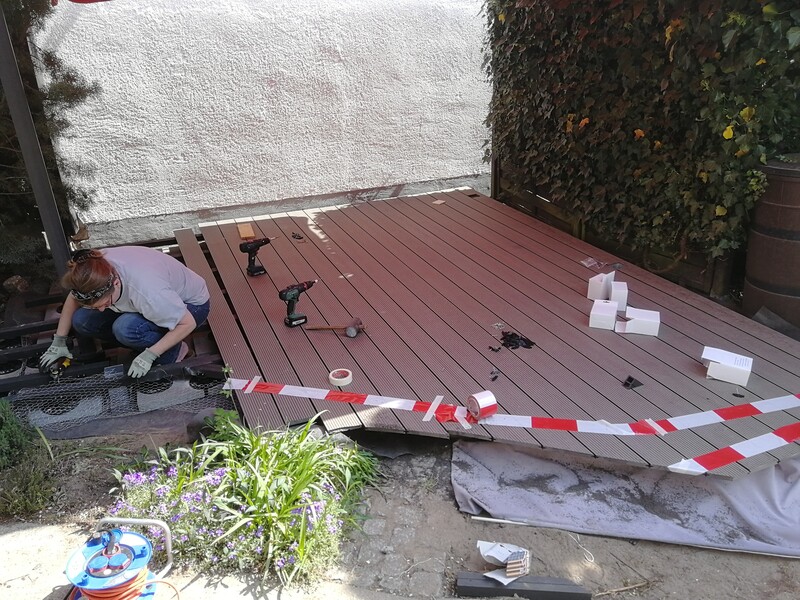 We have a large umbrella for the deck and it has a foot pedal for turning it. To still be able to access that pedal an access hatch had to be made. It's a simple construction made from left-over WPC. A finger hole makes it easy to open. 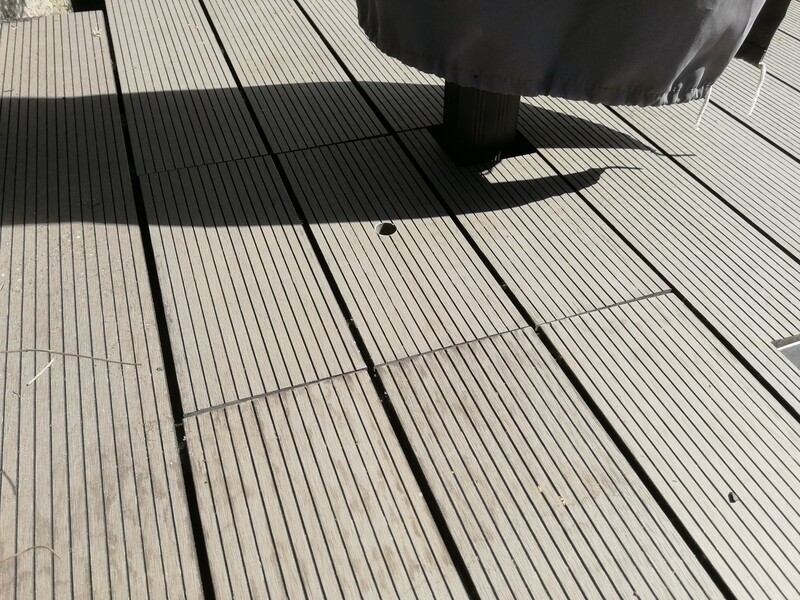 To cut the front edge we used some masking tape to figure out the curve we wanted. The cut was done with the jigsaw. 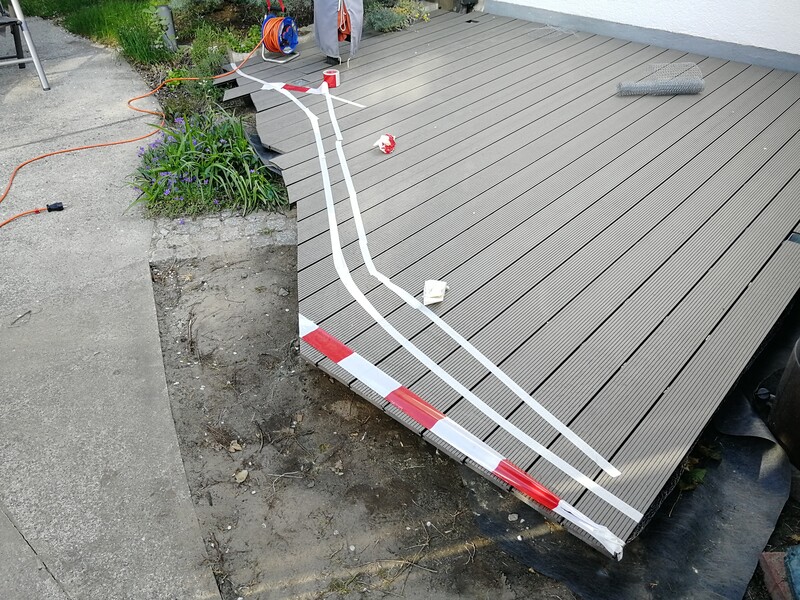 At the entry point, I attached a vertical plank and used an angled aluminium plate as corner protector. To avoid having any protruding edges, the aluminium is inset using my router. I opted for 3M VHB tape to glue the aluminum down – its temperature rating should hopefully make it suitable for this use. 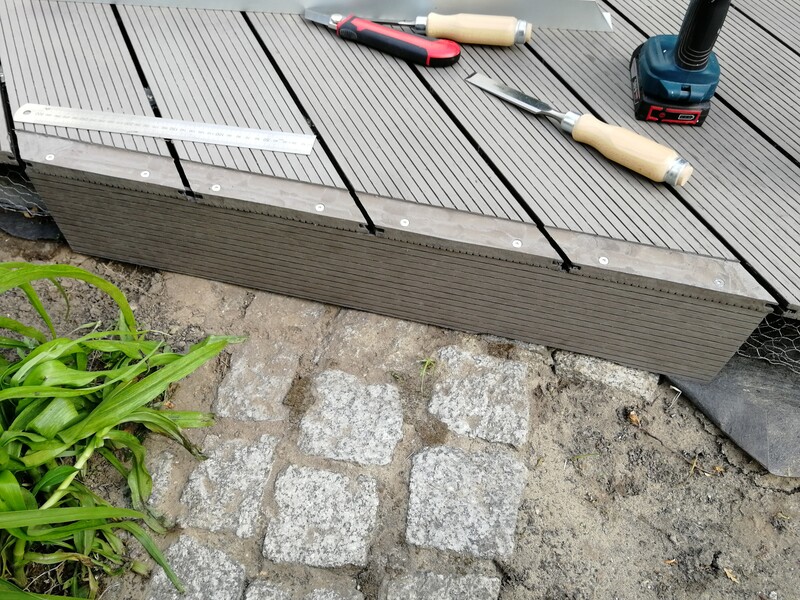 To cover the front of the curved parts, we opted for a cheap method. Simple heat treated wood palisades, half buried. They might need replacement in a few years but are fine for now. 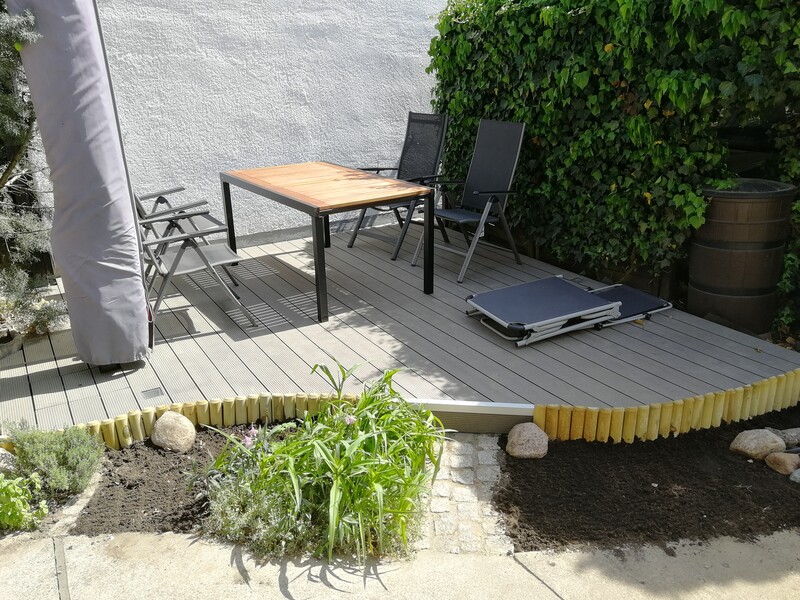 In front of the deck we wanted some flower beds and I thought it would be nice to have tiny little pond as well.

A buried mortar bucket with a few stones around the edge form the little pond. A solar powered pump adds oxygen and a relaxing gurgling sound. No fish but a couple of water plants.

I really really like it. It's a place where birds and insects can come to drink and it makes the whole deck more comfy.