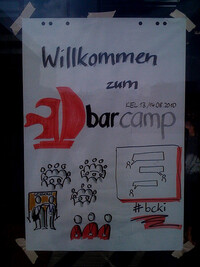 I've been to Barcamp Kiel last Weekend and had a great time. Catering and the coffee were excellent, the WiFi mostly worked and the people and spirits on this first Barcamp were great. Kudos to the organizers!

Below you can find short summaries of the sessions I attended.

The first session I attended was about the WAC Initiative. It promises a new way to code applications for different mobile devices using web technologies and also provides the distribution channel. It is driven by a lot of big telcos but so far hasn't much to show. They expect to be ready for show time in 2011. A long time for the mobile market. The guy who led the session was a developer himself, but when I asked what motivates him to root for WAC his only answer was the possible money to be made. A valid point but surely not the main driving factor for many (most?) developers.

Next was “Gimp by a Dummy”. This was an introductory session on using Gimp. I probably shared more than I learned here, but that's what Barcamps are about. At least I got an interesting idea about using a path library to add callouts to images.

Then my turn came and I held a session on DokuWiki. Because I hadn't prepared any talk I declared it a DokuWiki Workshop

. I did a live install of DokuWiki and showcased the basic features, then the audience took over by asking questions. This led to some talk about the internal file structure and available plugins and themes. I think it went very well. One of the listeners later told me “If I had known DokuWiki before, I wouldn't have installed MediaWiki”.

After that I got to see some sunshine. Some students from the Bonn university presented their mobile game Mister X which is an adaption of the Award winning Scotland Yard board game. We played in teams of two, with 5 teams being detectives trying to catch the Mister X team. The mobile phone displays a map of your surrounding as well as the current position of the detectives. Mister X's position is only shown every two minutes or so. There are also randomly positioned virtual items on the map which can be collected by walking into their proximity. Items then can be used to irritate the enemy. Eg. there are fog bombs or map rotation attacks. Needless to say that my team managed to catch Mr. X of course

Back at the venue I attended the Online Backups session. A topic that is on my todo list for quite a while. We talked about various problem with backups in general. The tool the session master recommended (besides his own commercial solution) was duplicity. I'll have a second look at that tool for sure.

The last session of the day was about “What's on in Kiel?”. I was surprised about the large amount of tech meetups in the area, but since I'm not from Kiel this wasn't too interesting to me.

The evening finished with a blogger's reading called Jour Fitz which was extremely funny. I especially enjoyed the texts by @judetta and @judetta. MC Winkel OTOH was somewhat disappointing. I had enjoyed his presentation at re:publica a lot, but his performance here wasn't really good. Maybe a bit of preparation would have been a good idea after all.

Saturday started with a git Introduction session. Since it was a beginner level session I didn't really learn much here, but a few best practices were exchanged.

The next session promised to explain Usability and User Centric Design. An interesting topic, but unfortunately this talk had too much introduction and not enough practical explanations for my taste.

Craving for some more technical content I went to the NoSQL session which was excellent. It gave a good introduction on how NoSQL databases work and what features of ACID databases are sacrificed. I also jotted down some things I want to learn more about: TAHOE, Merkle Trees and MongoDB.

Reputation Management was next. The talk was given by two people from New Communication Kiel who offer a software supported brand reputation monitoring for companies. I found that generally interesting, but wonder if outsourcing social media monitoring is a good idea because it doesn't allow for fast reactions. Or so I guessed. Discussions then circled around how others monitor their brands and react.

I then turned to more technical things again and I attended a session on node.js. The presenter gave an excellent introduction. Node.js looks really interesting and I'd love to do a project with it. I even started to download and compile node.js during the session.

The sessions in the last slot weren't that interesting and I decided to do some geocaching instead.

We finished the evening at a Sushi Place called SOHO Kitchen. The owner had offered at 20% rebate to Barcamp visitors earlier via Twitter. Web 2.0 in action