I spent the weekend at the BarCamp Berlin. It was my first BarCamp and it was good

. I'm still very exhausted, and it was just too much to blog it all in detail, but you'll find some short summaries of all the sessions I've seen below. 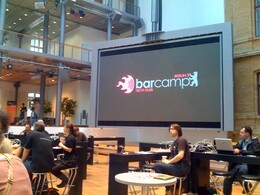 It was fun to meet some old acquaintances like Martin Koser, Thomas Herr or Oliver Krüger and it was equally cool to finally see the faces behind some identi.ca nicks like igorette or muhh.

Speaking about identi.ca, microblogging was a big topic on this BarCamp, but somehow I missed all the sessions on it. Unfortunately the huge Twitter wall was Twitter-only and didn't support http://identi.ca or other laconi.ca installs – maybe next time.

The location (sponsored by T-Systems) was nice and spacy, but the acoustic was lousy. That made following the speakers very hard most of the time. Catering was ok for me but I heard of many who said having seen better on previous BarCamps. Personally I wasn't a big fan of the flavored coffee they served Saturday. At least there was Jolt

Unlike at the re:publica, the EeePC was no longer the dominant electronic device. There were a lot of netbooks but from all kinds of different brands.

Most prominent was the iPhone. My guess would be that every 5th visitor or so had one. And I have to say it really works great for a conference – I wrote all my notes on it, I used it to post to identi.ca and to check my mails and took pictures with it. I really thought about leaving the Eee at home on the second day.

To sum it up: It was a great experience for me and I like to thank the organizers who made all this possible.

Refinding Things on the Web 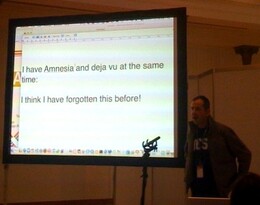 The speaker then showed “his” solution called Zootool, which didn't blew me away. Just another fancy bookmark service with image/video thumbnailing. The problem for me isn't bookmarking but refinding things I didn't bookmark.

Martin Koser wrote a bit about this session already. Nothing new here, so I left early.

I only got the last part of this talk. Benedict Roeser presented his crew's approach to write a theater play using a Wiki. The play will be shown in April 2009 and everyone can join modifying it at ödipedia.de (german). Interesting. 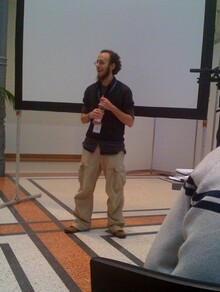 A really entertaining session about how to sleep better and get more out of it. Tips included to form a pre-sleep habit to let your body know when it's time for shutting down, avoiding TV (mostly because of the ads that are made to increase your awareness), avoiding eating (because it needs energy that is needed in your brain for sleeping/dreaming), drinking much water (better oxygen input) and avoiding exercise (but sex is okay

The speaker also made a point for afternoon naps (90 minutes recommended) and spoke against polyphasic sleep because it deprives you of social live and certain sleep phases needed for motoric learning.

Interesting, but nothing I'd like to be forced to use. Emulating loops with recursive functions and variables that are not variable is just too weird for me.

A session by Martin Koser. Nothing really new for me here.

But one thing catched my attention: when asked about the ROI for using Web 2.0 tech in the enterprise, Martin mentioned that hard data is missing, but the more interesting question is about the ROC anyway. With ROC standing for Return of Change – a change of culture. Something that many big corporations really need IMHO.

Probably the most interesting talk of the whole BarCamp for me. CouchDB has many really cool concepts making it ideal for web applications. Eg. storing arbitrary key/value pairs, returning data in JSON, builtin replication/distribution or JavaScript for index building.

However using it needs quite a bit rethinking when you come from working with relational databases. Or as one of the speakers put it: “relational DBs are for fixed data and dynamic queries and CouchDB is for dynamic data with fixed queries”.

I will definitively consider using CouchDB for future web projects.

The future of Mediaplayers 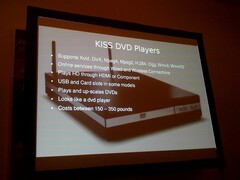 Ian Forrester did show how users can gain much more control over their media consumption using free software and inexpensive but versatile hardware (like game consoles and PCs).

The best media center solution in his opinion is XBMC which was originally created for the XBox but now works on Linux, Windows and Mac. There's also a social network called boxee.tv which is built atop of XMBC. I will definitively check out those tools for my HTPC.

Fiona Brutscher from be2.de talked about how they started a blog for their dating page. What was interesting is that they had to start this blog without much support from upper management (in fact there were many fears and negativisms) . Even today where it proved to be quite successful it is only linked from a tiny footer link at the main site.

The session was much more interesting than I first expected. Oh and I noticed a bookmark in her browser named “Be2Wiki” with a DokuWiki logo

This presentation was given by the guys from a company called Queap (link currently password protected). They patented an algorithm which apparently makes computing neuronal nets much more efficient (from exponential to linear growth). They use it to basically build a new kind of search engine which is supposed to “understand” the meaning of websites.

While the technology is cool I wasn't too convinced by their approach. They basically build a simple search interface where you can limit your results to certain automatically detected categories. This solves a problem nobody really has IMHO. Everybody can find stuff in Google pretty well already – when you know what you are looking for. The problem is finding stuff where you aren't sure what you look for. 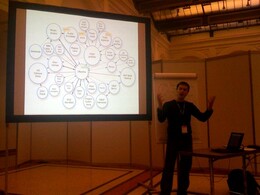 The next talk by Andraž Tori went a bit in the same direction as the previous one: make machines “understand” the content. However Andraž' used a more conservative approach and “simply” tried to improve tagging.

Current tags systems have the problem being ambiguous. The tag “jaguar” may mean a car or a an animal. His suggestion is a kind of microformat which attaches Wikipedia URLs to a tag. To make tagging simple for users he suggested automatic tools which help with tagging by making suggestions and doing auto completion. It's not a coincidence that his company Zemanta is providing such a tool

BTW. A *lot* more and better photos can be found on flickr.