Today I read an article on problogger about the Google's adsense for feeds ads not being contextual enough. 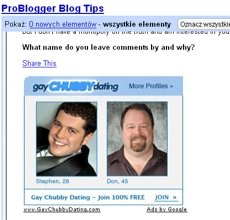 The one ad Darren complained about was for a “Chubby Gay Dating” site. He's right, you wouldn't expect an ad like this on a page or feed about blogging. But then he wrote something that got me thinking:

Yes, it's not contextual. But he might be overlooking something. The percentage of chubby gays might be indeed a bit higher on problogger than, let's say on the New York Times website. I don't know that, but it wouldn't surprise me.

Of course this ad is most probably an accidental misplacement from the adsense algorithm. But that it still might be relevant to a “fair share” of problogger readers shows what I think might be wrong with contextual advertising.

Have a look at TV ads. TV ads are not contextual targeted. I do not get advertising for robots and guns when The Terminator is on. I get ads for razors and cars. This is because TV ads go for target groups. In the case of Terminator primarily males between 15 and 45 (just a guess). How target groups are determined isn't always clear to me but at least the women/men targeting is very easy to spot.

However for online advertising, everybody still thinks contextual ads is the way to go. When I'm on a travel blog it isn't uncommon to show Hotel or Airline ads. Personally I'm more likely to click on an ad for a cool gadget, regardless of the website's content.

The only place where I think contextual ads are the best possible choice of advertising is search.

What do you think? What ads are you more likely to click on? Ads contextual to the page's content or ad's targeted on your interests (or what probably your interests are based on the website's demographic group)?