Telecolumbus sucks, or does it?

Ever since I moved to this apartment, I'm using a 16Mbit ADSL line to hook up to the Internet. And while 16MBit is fine for web browsing, it's not really fun for larger downloads. So it was time to find an alternative.

My current DSL provider is phasing out the private customer products so simply upgrading my plan was out of question. Instead I looked at what my local cable provider Telecolumbus has to offer. For basically the same price of my old ADSL contract I would get a 100Mbit cable connection.

Because I had some questions about their hardware, I went to an actual brick'n'mortar store to get my questions answered and to sign up for the new contract. They even gave me the modem right away.

Unfortunately I had to wait for a technican to exchange the cable socket. A week later he arrived and hooked me up to the new shiny Internet.

Once he was gone, I sat down and ran a speedtest. The result: about 50Mbit. Ugh. Just 50% of what I signed up for? Well, still better than my old DSL. However that was in the early afternoon.

Kaddi came home in the evening and complained about the slow Internet. Another speedtest confirmed her complaints: barely 5Mbit. Worse than my DSL! That wasn't what I had signed up for.

I called their tech service for the first time. The guy could see my speedtest results (that I had repeated at the Telecolumbus website) and agreed it sucked. However he said he would need a comparison test early in the morning. So I did - lo and behold, I got the full 100Mbit! So I called tech support again. The woman this time was less helpful. She basically said she would file a complaint but could not promise when that would be fixed.

I was pissed. But vacation was waiting. The same day we left for a week to the Czech Republic.

When I returned I did a speed test again. No change. Still 5MBit in the evenings. So I sat down and wrote a letter1) telling Telecolumbus to revoke my contract. Luckily I hadn't cancelled my DSL yet.

Another week passes and a Telecolumbus reply arrives telling me I can't revoke the contract because I signed it in a store and not online, so special consumer protection doesn't cover me. What the actual fuck? How is that even relevant when they can't deliver 5% of the promised speed?

So I was about to write another angry letter when I thought: well at least check the speed one more time. And can you believe it? The speed was close to the promised 100Mbit! In the evening!

So in the three weeks all this took they seem have to fixed whatever the underlying problem was. Instead of telling me though, they behaved like total assholes

Now, the correct thing to do would be canceling the service anyway because they apparently suck on the customer service side. But of course I'm very lazy2) and I like to have fast Internet, so I'm now surfing at 100MBit3) 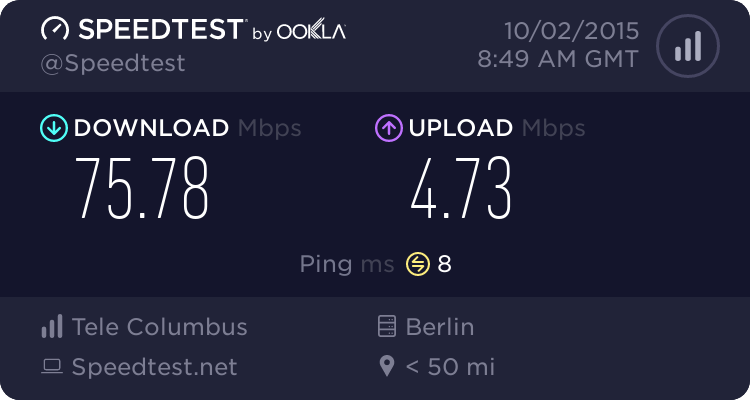 1)
isn't it nice how you can easily order things online, but always have to snail mail to cancel?
2)
Yes, I will regret this decision every time I will have to deal with their customer service
3)
actually more like 75MBit because of some bottlenecks in my local network