For the last 4 years my home network setup was basically the same: Internet arrived through a 16MBit ADSL uplink and got routed via my trusty FritzBox. But as detailed in my last post, I now have a new Internet provider and that required some restructuring.

There were a couple of problems to solve:

So the cable modem expects to be connected to a single device. It will assign an IP via DHCP once and only talk to that device afterwards (possibly using a MAC check) until you reboot it. So this rules out using the cable modem as the main DHCP server in the whole network. It also rules out connecting it to the network, ignoring it's DHCP and simply set a static route to it. It has to be directly connected to a router.

But as said above, that router can't be my WiFi router because that has to be located elsewhere. So what I needed was a router in the office and an access point in the hallway. In the end I came up with the following setup: 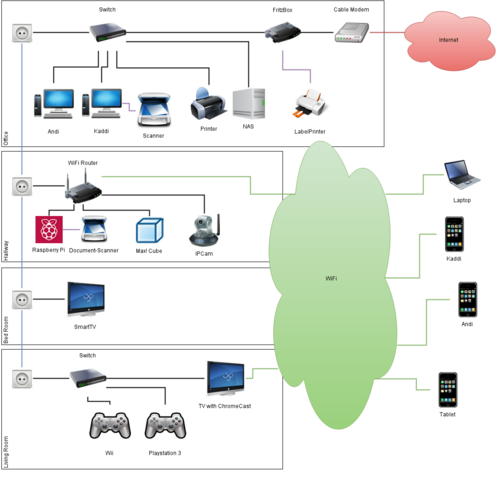 I use my old FritzBox as router and DHCP server. As an access point I use a new Asus RT-N66U. Rooms are still connected by PowerLan.

This works for now but isn't ideal. The FritzBox is nearly 5 years old and seems not to be able to route the full 100Mbit coming from the cable modem to the rest of the network, so the result are just about 75Mbit. For WiFi and all other rooms than the office that's fine since my PowerLan setup isn't much faster either, but full speed in the office would be nice.

A simple gigabit capable router without WiFi would be nice, but I couldn't find a good candidate yet. Something simple like a Raspberry but with two Gigabit interfaces would be nice. Or maybe I just buy another cheapish WiFi router.