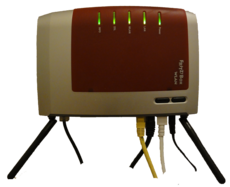 Recently my Linksys WAG 200g AccessPoint/DSL Modem/Router stopped working 1) and I had to look for an alternative. The one I finally bought was the FRITZ!Box 3270. It's a wall mountable, 802.11n (Draft 2.0) wireless router with an ADSL2+ modem and 4 ethernet ports.

I bought it because I heard good things about the FRITZ!Box series from friends and on the net. The FRITZ!Box is product of the Berlin based company AVM. I used AVM ISDN cards in the distant past and they were always reliable and well supported. And that seems still to be true for their current products. The FRITZ!Box hardware is really nice and sturdy and so far I had no problems with disconnects.

Some product photos show the model to have three antennas but mine only has two. Looks like AVM decided they could drop one and save a bit of production costs. I don't know if that has any influence on the signal strength.

The hardware looks good, but what about the software? Let's start with the good things first: The interface can be switched from a simple, end-user oriented interface to a more complex one with more options to fine tune. I really like that idea. The advanced interface has some pretty cool features to analyze the DSL connection parameters - something I never have seen before in a DSL modem. Very cool. There's also a feature that shows the use of WiFi channels in your surroundings and helps you to choose a less crowded one.

Also rarely seen, but supported by the FritzBox is full IPv6 support including IPv6 tunnel setups.

Unfortunately – now we come to the bad things – even the advanced interface is missing settings I simply expect from a wireless access point. For example there's no way to set the DNS servers used. The box will always use the ones provided by your ISP and distribute it self as the local nameserver via DHCP. There's also no way to specify what your local domain is called. The DHCP server always pushes fritz.box to the clients. Annoying.

Luckily at least for the primary DNS servers a somewhat hacky solution exists – you can download the configuration as a text file, change the servers in this file and load the config back to the box.

Other software features you'd expect from such a device are implemented and easy enough to configure: local DNS names, Port Forwarding, QoS, UPnP… all there. There's even an option to start a temporary second WiFi network for guest internet access that's separated from your default network. Even IPSec VPNs can be configured, unfortunately not through the web interface. Instead you need to use a (Windows) tool on your desktop to configure the VPN, export a configuration and then upload it to the FRITZ!Box. No OpenVPN support though

A curious feature is an additional LED which does nothing by default. You can assign a custom function to it from the web interface. Unfortunately there are no really useful choices

. On the other hand the typical network traffic LED that flickers when data is sent or received and that is included in every cheap AP I've seen so far is missing. Too bad – I like my blinkenlights.

Another thing you won't find on many other access points is the USB port. By connecting a flash stick or an external hard disk you can share it's contents in the network via UPNP-AV, SMB and FTP.

Speaking of telnet: The webinterface is not protected by SSL. If you log in via WiFi, everyone in your WLAN can easily sniff your administrator password. There is an option to enable SSL, but it will also enable access from the internet. How stupid is that?

TL;DR: The FritzBox is a solid device with good end user features, a lot of cool features you rarely see in a AccessPoint like IPv6 and NAS, but misses some very basic features.

1)
It failed to establish a PPPoE connection