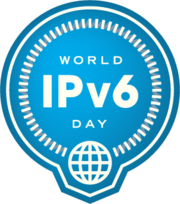 Today is World IPv6 Day. Many big players on the Internet like Google, Facebook and Akamai will enable IPv6 support for their services as a “test flight” for 24 hours.

This will give them a good way to see if there's still anything buggy in their setups but is also meant as an encouragement for everybody to finally make the switch to IPv6.

Thanks to my router's capabilities and the free IPv6 tunnel service from Sixxs I have IPv6 at home for a while now.

Now the servers running DokuWiki.org and splitbrain.org are native IPv6 enabled, too.

Both servers are hosted at Hetzner. Since this is a popular provider in Germany I thought it might be a good idea to give a short introduction on what I had to do to make my servers IPv6 enabled.

You will need a IPv6 capable firewall script. Unfortunately these seem still to be rare. On splitbrain.org I'm using Arno's Firewall Script. Unfortunately a recent version with proper IPv4 and IPv6 support is only available in testing. But you can simply install the package from testing:

All you need to do for IPv6 support is set the follwing option in /etc/arno-iptables-firewall/firewall.conf

On the DokuWiki.org server we're running shorewall. For IPv6 support you'll need to install the shorewall6 package on Debian and setup a completely new firewall right beside to your IPv4 one. Luckily you can simply copy (or even symlink) most config files as they work exactly the same as for IPv4.

Next, is to configure the IP address. Hetzner has native IPv6 support so there's no need to fiddle with any tunnel configs. They provide you with your own IPv6 /64 subnet, just order in the robot. A minute later you'll get a mail with the details.

Here's what I got for the splitbrain.org server:

Since there's no router advertisement, IPs have to be set statically.

As you can see, the gateway is not part of the subnet you got assigned. Hetzner's wiki recommends to set a route to the gateway. That worked well on the command line but didn't work when put in the /etc/network/interfaces config of my Debian system1). This was probably caused by a bug in Arno's Firewall.

My workaround was to simply set up my interface with the full /59 network. This way, the route to the gateway is implicitly clear. Of course I have to remember not to use any addresses outside my real /64 address range, but I don't plan to use more than one address anyway.

After a reboot, you should check if your interface has the correct IP:

Now let's ping something outside, we can use the IP of heise.de:

The same again with DNS name:

Finally ping the server from the outside2):

Once everything works, you need to add AAAA records in your DNS to point your domains to the IPv6 address as well.

I manage my domains through regfish, where I have a convenient web interface for adding DNS setups.

You should also add a reverse DNS entry for the IP you configured at your server. This has to be done whereever you got the domains from. In my case at Hetzner's robot:

1)
The my ip route calls in the up stanzas seemed to be igonored
2)
You need to do this from a IPv6 enabled system, alternatively use an online tool