I hate to talk on the phone. I hate to be called, but I hate it even more when I have to call somewhere. At the job it's a necessary evil, but in my private life I try to avoid it as much as possible. Unfortunately sometimes the phone is the only option to reach some businesses. Doctor Appointments are one example.

But where to find one? In the US there are services like FancyHands and TaksRabbit, but in Germany services like these are not well established.

I googled around and found a handful of websites that offered VPA services (Strandschicht and eAssitentin.de seem to be the most popular ones). But they are quite different from their American cousins. For example none of them allows you to simply register and get started. You will have to write to them and tell them your expected task volume and they will answer back some time later. 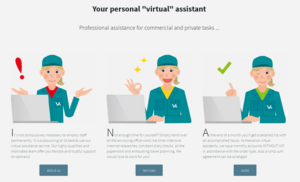 However during my research, I discovered that there are also freelance VPAs. That seemed an even better idea than to go through an anonymous agency. Instead you'd have a single contact you could rely on and who would learn your preferences over time.

I found Ina Hermess' website and immediately liked what I saw2). I shot her a quick email and maybe 10 minutes later I already had a reply. We established a couple of basic things like her rates and my preferred contact channels and were ready for the first task.

My initial task was to confirm a reservation I had made at a campground but hadn't heard back from. She called them and learned that it was fully booked for the weekend in question. So I asked her to pick a similar campground and gave a few criteria (located on a lake, reachable within 2 hours, good reviews). She came back the next day with four suggestions which all matched my criteria perfectly. I gave her my preference and she booked for me. Perfect execution and I did not have to make a single phone call

TL;DR: hate phone calls? let a VPA make them for you

1)
Well theoretically you could also call, but that defies the purpose for me

2)
seriously, that page is better designed than all the “big” VPA agency pages together