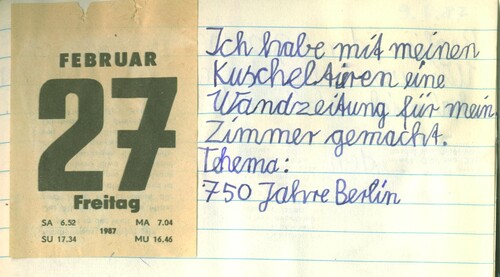 Together with my stuffed animals, I made a wall newspaper for my room.

Okay. That's an odd one.

Let's start with the “wall newspaper” - that was actually a thing we did in school and it was part of the pioneer thing I mentioned before. A group of pupils had to maintain a pinboard, showcasing information about various topics to the other kids. I remember various sport events and I think there was some astronomical thing once. I was involved with it relatively often because I preferred this over the other possible tasks you could do.

Apparently I enjoyed it enough, to make a private one for just me and my stuffed animals to look at. I was a geek early on

The 750 year celebrations were a huge thing in East Berlin. A lot of money went into the city for renovation and it was big propaganda opportunity, so newspapers were full of it. Lots of material for young me