New Games for my Wii

After having finished Zelda last week, I was in desperate need of new games for my Wii. After reading some reviews I went shopping on ebay, to buy Excite Truck and Rayman Raving Rabbids. Here comes a short summary of what I think about these games so far… 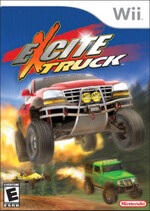 Excite Truck is a racing gaming. As the title suggests, you control a “truck” (from beach buggy, over Jeeps and typical SUVs to real Monster Trucks). You start with a limited choice of tracks and vehicles and can unlock more of them during the game. A nice twist on the usual gameplay is that you don't need to be the first at the finishing line to win. Instead you need to have the most points. Points are given for winning the race, but also for stunts you do during the race like jumps, drifts or crashs. More points can be gained by collecting special items which will change the track to allow you to do higher jumps or collect “rings”, each worth another point.

The game is played with the Wii-Remote hold horizontally like a classic gamepad controller. Steering is not done by pressing buttons but by tilting the controller. After a few rounds it feels very natural. Buttons 1 and 2 are used to brake and accelerate and the control cross engages the turbo booster.

If you don't like the music which comes with the game you can put a SD card with your own MP3s into the Wii and Excite Truck will play them instead. Nice idea.

The two player mode uses a vertical split screen but works the same as the single player mode. In multiplayer you can only access cars and tracks you already unlocked in single player.

Summary: The game is fun, the controls work fine and it comes with a multiplayer mode. It may not be anything groundbreaking new, but it is worth its money.

Rayman Raving Rabbids just arrived today, so I haven't played it too much, yet. It's not really a game, but many, many mini games.

The story goes like this: Rayman and his frog friends get kidnapped from their peaceful picknick in the woods by some rabbits and their evil master rabbit. The frogs are imprisoned and Rayman needs to master all kinds of crazy tasks for the rabbit's amusement. The story sounds like illegal drugs were involved while inventing it and the mini games, graphics, sounds and the strange humor all support this impression.

This game is nothing for a peaceful play on the couch. Many of the mini games need full body action with Wii-Remote and Nun-Chuck and all games are controlled differently. Before each game a rabbit explains what you have to do and how to use the controls. You start in a arena with four doors, a mini game behind each. You need to complete at least two games before you are allowed to leave the arena for a Western style shootout to free one of your frog friends. However you're advised to finish all four of them to unlock some gimmicks in the game (I haven't done this, yet).

Games include things like “Cow Throwing” (swinging the Wii-Remote like a lasso), “Disco-Dancing” (using the Wii-Remote and Nun-Chuck like drum sticks to hit rabbits in the tact of the music) or “Exploding Packet Delivery” (wiggling Nun-Chuck and Wii-Remote alternating to run). Some games are very easy, others need quite a bit skill in handling the controls but all I played so far are very strange and funny.

There is also a multiplayer mode but I haven't tried it, yet. You will probably need a second Nun-Chuck, which I don't own, yet.