Three NDS Games to Play with your Girlfriend

What's better than playing Nintendo DS? Playing with your girlfriend1) of course

Unfortunately it is not very easy to know if a game is great in multiplayer in advance. This post is an effort to use the crowd intelligence of my readers to find new games.

Here is the deal: I'll make a start with three games Kaddi and me love to play. You add your favorite games in the comments. 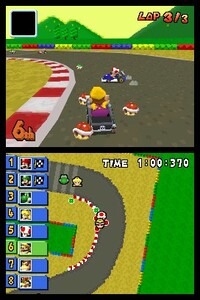 Mario Kart is a classic since its debut at the SNES. The DS version is according to Wikipedia the best Mario Kart ever. I don't know them all others but its probably right.

For the uninitiated: This is a go-kart racing game. You choose one of various Nintendo game characters like Mario, Princess Peach or Yoshi. Each has its own strengths and weaknesses. During the race you can collect specials. They can be used to slow down your opponents or to make your self faster.

Mario Kart DS can be played with a single game cartridge. It has a lot of different tracks and is the ideal game for some quick action.

You can also play this game through the Nintendo WiFi service on the internet. 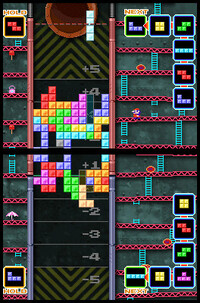 Another classic. The well known puzzle action game is still great on the DS.

Nintendo added a few new modes to the classic falling blocks marathon one. But to be honest, the new single player modes aren't worth buying the game.

Where Tetris DS really shines is the multiplayer mode. Again you can play it with a single game cartridge via Download Play. There are two modes.

In Standard mode you try to clear lines. If you clear 2 or more rows at once your opponent gets additional rows added at the bottom of his or her screen. The goal is to survive longer than your partner.

The second mode is somewhat harder to grasp at first. The mode is called “push mode” and uses both screens of the DS. Stones are falling from the upper and the bottom screen edge. You are in control of the ones at the upper screen while your opponent controls the lower ones. You both try to remove lines. Whenever you clear more than two lines the middle of the screen is pushed closer to your opponent. It's really hard to explain but extreme fun. Because you are both playing at the same field you directly interact with the other player.

There is also WiFi play over the internet. 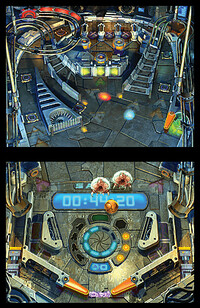 This is our latest game. As the name suggests it's a pinball game.

It features excellent graphics based on the Metroid game series. According to Wikipedia there are six different tables available. So far we had no success in unlocking them. Yes, we suck at Pinball

But the game also has a multiplayer mode available as single cartridge Download Play. Unfortunately only one table works in multiplayer mode. Both players have their own table and try to reach 100,000 points first. By activating certain bumpers you can send ball eating creatures over to your opponent. If you loose a ball your points are set back to the current score of the other player (if lower). This doesn't sound like much but works very well.

This game is not playable on the net.

Now it's your turn. What multiplayer games for the DS can you recommend?

1)
or boyfriend if you prefer