You managed to stay young...

Happened to Kaddi and me this morning. There isn't much more to report, but I'll do it anyway 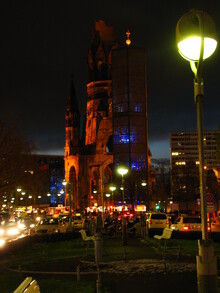 We had the first snow in Berlin today. Unfortunately it rotated between hail, snow and rain with an unpleasant wind, so we had to abort our geocaching tour.

Instead we had lunch at KFC and explored the Saturn electronics store in the Europa Center. I didn't knew it is so big. We spent some time looking at digital cameras. I wasn't aware of the Canon S5 being available already (I own the pre-predecessor S2).

Then we moved on to the refrigerators (the big ones with ice crushers or TV screens built in). An employee explained why Samsung is the superior brand (because separated cooling systems) and how we have to make sure our doors are big enough to get the fridge through. She was very nice, but we had to explain that even if our doors would be big enough, our kitchen and bank account aren't (yet).

After the fridges, the vacuum cleaner section was the next logical step and we spent some time with the Dyson machines. I guess men love them for their futuristic design and their pistol grips. The Dyson handheld did remind me of a Ghostbusters proton accelerator

. Kaddi wasn't too convinced on the bagless system. She argues that emptying the dust container would make a huge mess. Has anyone of you any experience with a Dyson?

Even though we were quite tired already we had a quick look at the available notebooks as well. I took a glimpse at the Sony TZ model and is really as great as I thought. The keyboard is very usable despite of it's size. Maybe next year…