Getting rid of Stuff

I will move to a new apartment on Friday, so posts might not be as regular as usual for a few days.

A move makes you really aware of all the stuff you own but nearly never use. I seem to own an awful lot of it. I have about 40 to 50 boxes here 1). Even though I packed them myself over the last few days I'm not really sure what's in there. This is because the most important things, i.e. things I use daily are not packed, yet.

I did not really miss anything from the boxes so far. This means I have 40 to 50 boxes of stuff I do not really need. Let's see what kind of stuff that is and how to get rid of it.

Much of it are books. 373 to be exact. Most of them already read. I doubt I will read most of them ever again. But you can't throw books away, that's like burning them. I will try to lose them through Bookcrossing instead.

Some other boxes contain clothes and bed sheets. I'm a man, so the number of clothes is reasonable

. Not much to get rid of here.

Then we have electronics and spare/old computer parts. Before I started packing, I threw away2) two big boxes of that stuff already. It was a bit hard, but I'm sure I will not miss those floppy cables and ISA cards. I also threw away about 10 hard disks ranging from 100MB up to 40GB3). Still there are a lot of parts left. I need to throw away a bit more of this stuff, when unpacking.

Several boxes contain kitchenware. Again there's some stuff I maybe use just once a year. Like liquor glasses. Do I really need something like that? Couldn't I use a normal glass instead and just not fill it completely? Do I really need a muffin baking mould? When did I ever made muffins, anyway? I'd like to get rid of a few things here but Kaddi might disagree. 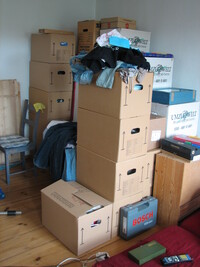 What is the rest? I do not own any CDs anymore. MP3 uses less physical space. The same goes for photos. Scanned them all. There's not much memorabilia left, except for about 250 empty beer cans. Yes, I once collected them and still found no good way to scan them4). Until I transfered those memories to a digital archive I'm not quite ready to part from them.

There are still some boxes left. Those probably contain the most questionable content. All those small things you bought because they looked nice and decorative or you thought they might come in handy some day. Or things you got as a present and you can't throw away because it was a present by someone. There are so much of those. But getting rid of these things is really hard for several reasons:

Yes, I mentioned the first three already, but those are still valid points. So how to get rid of this stuff? Honestly I don't know, maybe you can tell me.

Let me know what stuff you have accumulated and like to get rid of. What strategies did you use to reach material Zen?

Any tips are appreciated.