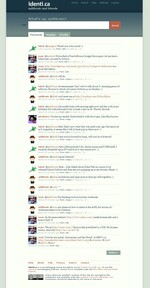 If you follow me at Twitter you may have noticed, that I barely tweet anymore. This is not because I no longer interested in micro-blogging but because I found a different platform to do so. This platform is Identi.ca.

There are probably a dozen Twitter clones coming out each month, but Identi.ca is a bit different. Identi.ca is not just another web service. It's a philosophy. It is all about openness. All tweets (or dents as some like to call them on Identi.ca) are licensed under the Creative Commons Attribution license and the software itself is Open Source, too.

Yes, that's the coolest thing about Identi.ca: you can download the software behind it (Laconi.ca) and run your own micro-blogging service. And not only that - all Laconi.ca installs can talk to each other so you can subscribe to people on different servers similar to what Jabber does. Distributed micro-blogging, yeah.

Laconi.ca development is going really fast and a lot of features where implemented in the few weeks it is available. There's a Jabber gateway, a (working) reply tab, a Twitter compatible API, hashtags, OpenID logins, tracking, search and RSS feeds for everything1).

An interesting touch is the license the Laconi.ca creator Evan Prodromou2) choose: the Affero General Public License (AGPL). I never heard about it before, but it basically boils down to a more radical version of the GPL. You have to make the source available to all your users. In contrast the “normal” GPL only requires you to deliver the source when distributing the software it self, which does not apply to web services. Using that license is a good idea for a service that aims to create a open and distributed cloud. Time will tell how well it can be enforced though.

So follow me on Identi.ca and say goodbye to the fail whale.

1)
which basically sums up what Twitter failed to provide and had to buy Summize for
2)
yes, that's the guy behind wikitravel