How identi.ca Groups Could be Improved 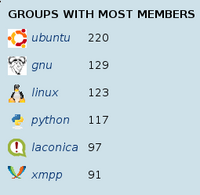 Right on time for the MBC in Hamburg, the micro blogging service identi.ca released a new version. The most prominent new feature besides the design is group support.

Everybody rushed in to create and join new groups1). But very soon groups became a problem.

Identica groups work like @-replies to all group members. This means if you are a member of a given group, you will get all messages containing the !groupname. Regardless if you are subscribed to the sender or not.

The problem arose when people started to use group names as they did use hash tags before. Or as tante puts it:

When I got notices like “restarted my !linux server” I knew we were having a problem.

Delivering such a message to a crowd of a few hundred group members is insane, of course.

I quickly unsubscribed nearly all groups after just a few minutes again.

Then I started thinking how groups could be improved. So here are my suggestions.

A group is basically just a simple way to send a message to a bunch of people, but making sure it gets their attention. So why not let me define who's in that group and let me use it to address these people only?

Eg. I could have a group !buddies consisting of just a few close friends. Then I could send

!buddies beer at my place at eight?

and the notice would only appear in the streams of the group members but not in that of all my other followers.

It would make it easier to have semi private conversations while improving the signal-to-noise ratio in my public identi.ca stream.

People are (mis?)using micro blogging to announce things, eg. by forwarding blog RSS feeds to identi.ca. Why not take it a step further and have announcement groups where everybody can join, but only a few selected people can post to?

!foorelease New version of foo released get it at http://example.com

This could even be used a kind of multi-author micro blog. Eg. some guys doing a “micro-techcrunch”.

Remember the personal groups I mentioned above? These work similar, but my buddies could answer to the group.

However, new members to the group need to be admitted by the other group members.

The gentlemen's club of identi.ca

Not groups, but fit into the same line of thought. There are things I want to be spammed with. Eg. I want to read every mentioning of DokuWiki on identi.ca but surely not all !dokuwiki members would want to read that.

However there is perfect way to classify messages already without spamming everybody: hash tags.

Unfortunately there is no way to track them currently. Adding a way to subscribe to tags would solve that problem.


These are my ideas how groups on identi.ca could be improved. Got better ones? Leave a comment please.

1)
Of course there's a dokuwiki group as well