I've been to the RegioWiki Camp 09 this weekend and had a fantastic time. I attended a lot of interesting sessions, enjoyed the hospitality of the Furtwangen University and met old acquaintances and new people. I even went on a short walk into the Black Forrest led by the mayor of Furtwangen himself. Before I talk about what I learned in more detail, I want to thank the whole org-team and Friedel Völker especially for organizing this camp. 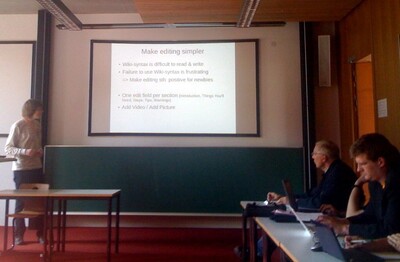 There where two sessions that where especially interesting to me, because of their close relation to what we do at the ICKE 2.0 project currently.

The first one was by Church of Emacs. He's a long time admin in the German WikiPedia and just recently joined WikiHow. His task there is to get the German part of WikiHow growing and so he talked about WikiHow and encouraging collaboration.

Even though WikiHow saw easy editing for novice users as their main task to improve participation, they did not just quickly jumped on the WYSIWYG bandwagon. Instead they deliberately kept the syntax, but instead structured the editing process. They call it a “Guided Editor” which basically provides multiple editing fields for the various steps of an Howto and includes simple wizards for adding media and categories.

A somewhat similar session was held by Tim "Avatar" Bartel on Saturday. He's working for Wikia and talked about the various usability improvements they did on the MediaWiki engine.

Interestingly it seems that the way how image and media uploads are handled in MediaWiki is really horrible from a usability standpoint. Both, Wikia and WikiHow, changed it dramatically. It made me smile to see that their results are looking similar to what DokuWiki had for years now

But Wikia not only changed how images can be uploaded but also made other changes (which BTW are all available as Open Source in their SVN repository). One of them being a WYSIWYG editor.

But also changes to the skin were made. They tried to remove “link clutter” by moving less important links out of sight using flyout menus and made remaining buttons and tabs more clear to understand. And they not only relied on their good taste here, but tested most of the changes with A/B Tests.

They also used another very interesting metric to check the success of their methods: edit completion rates. When a user hits the edit button but finds the interface or syntax too confusing he will probably not finish his edit by hitting the save button. Logging often this happens or not

Wikia got some impressive improvements on that metric with their changes: 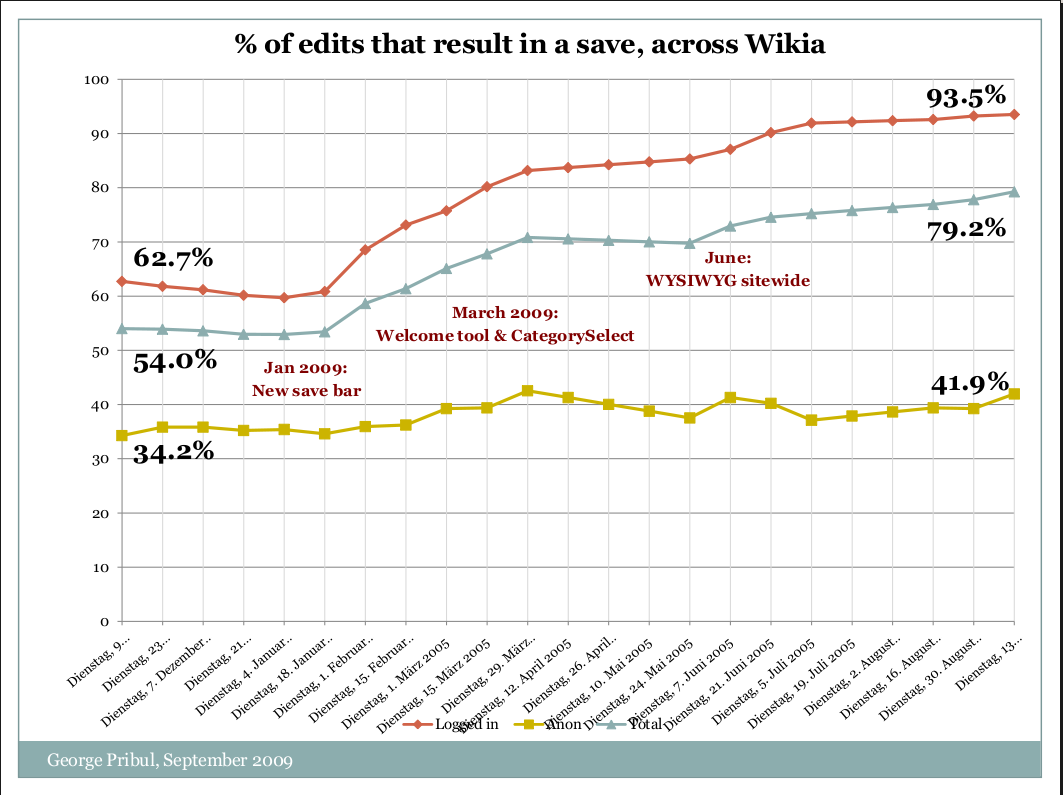 So these two sessions not only gave me a few hints on what to look at when trying to improve usability and user acceptance, but also on how to test if the changes were successful.