A letter from Bishkek

This is kind of a guest post. The brother of a friend is currently in Bishkek, Kyrgyzstan for a voluntary social service. He's working with kids there and was there when the government was overthrown.

This post is a letter he wrote home to his family and friends and he agreed to have it published here. I was fascinated by this first hand account of an event that I haven't heard very much about in local news here. I tried to maintain the original writing style while translating and hope you find the report as interesting as I did.

a much sadder report than the last one: my experiences of the last weeks. The revolution is what is influencing and will continue to influence society, friends, conversations and all areas of the country. 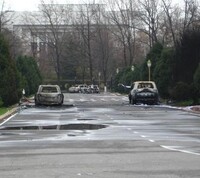 There are many sad experiences from the day of the war and the following days, which I'd like to mention at least shortly. Everything that happened there and what I have seen was like a movie, like action on TV. The dead, the injured who were carried and dragged to the hospitals. The countless bombs, grenades and gun shots that killed 86 and injured 1700 people. But after two days of a state of adrenaline and shock you suddenly realize that it all really happened. War is terrible!

Farewell party for a colleague, a Spaniard who's flying home. It gets late. I take a taxi back home. As always, the talk spins around the taxi's car brand and the beauty of Kyrgyzstan. By now I have learned that many taxi drivers are patriots. And so – half out of politeness, half out of truth – I join in and rave about the beautiful view on the “karsiwi gori” (beautiful mountains) I enjoy every morning. Suddenly the driver's face gets dark, the topic changes to politics. He talks about the president's son Maxim Bakiyev: by abusing his father's position he's illegally buying shares of the most successful companies for cheap. And if he's not buying them he receives protection money. The money goes to Swiss bank accounts.

No wonder exactly this night two planes with highly armed police forces are flown to Talas to regain control over the angry population there. But the situation is completely out of control already. During a speech the Interior Minister and the police are overwhelmed and beaten up by an angry mob with the cameras running. 10 people die through shots by the police and military.

At about 1 o'clock the streets of Bishkek are crowded by police cars and road blocks.

I take the same taxi to work to get up-to-date after hearing the (so far unconfirmed) rumors from Talas. There are no news, except that the governor has been deposed.

13:00 Dad calls and gives me the news about Talas. “Be careful, something could happen”. How true! 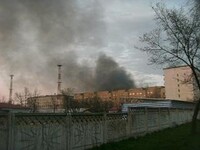 13:30 Our boss storms into the dining room, all kids will be taken home by their parents during the next hour. There are riots on the Great Square. Words of a “revolution” make the round, but nobody really believes in it, too mighty seems the state and military. We joke it could work today, after the protests during the recent months did not result in anything. Suddenly we hear firecrackers nearby. The kids get nervous, thinking it could be gun shots. We calm them down and explain how many people still have firecrackers left from New Year's Eve. Two hours later we learn it really were gun shots fired at a shop window nearby.

15:30 We bring the remaining parentless kids into the “24 hour house” and carry the provisions from the storage rooms into the house. Huge tons of pasta, potatoes, rice and other food. How long will this last? “It's the supply for two weeks!”

I slowly realize that the situation is becoming serious. 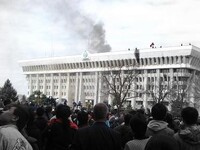 17:00 My colleague and I are on the way home. Everything looks completely normal, the public transport is working and most people look relatively peaceful. 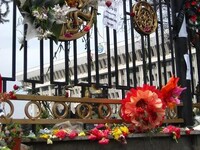 21:00 We're standing in front of our house. Again and again dead and wounded people are carried past us. “The situation is crazy” a passerby says, “they kill everyone who comes near the White House by head shots”.

Later we learn that about 20 marksmen were illegally bought in the Caucasus, Russia, Latvia and France and placed as killer machines on the roofs. 1700 injured and 86 dead is the final balance.

Police is firing with grenade launchers, bazookas and machine guns at the defenseless protesters. Even in my friend's flat the explosions were extremely loud.

The situation in Bishkek is still very confusing the day after the revolution. Especially in the evening there were shootings again and additionally stores and supermarkets were looted.

I went home as fast as I could and locked myself in.

We have a look at the events of the last days at the big Ala Too Square and take some pictures of the destructive frenzy. 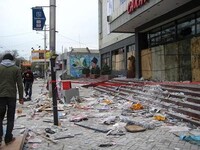 Three bombs are found and defused in the streets of Bishkek.

Like every evening, I sit on the balcony and listen to the gun shots thundering through the streets. Most of them are to prevent plundering, they say. I don't know if that's true. You can hear many sirens, even here in the outer districts. There was no thinking of going to work in the last days. I watched a lot of movies to distract myself and to forget the whole situation around me.

Shootings at people on bus stops. There are random shootings from cars in the whole city. Might they be under the control of Bakiyev?

Bakiyev on the same day: “When someone tries to kill me, the whole country will drown in blood…” (Interview with Reuters).

Again shootings on the streets during the night.

Shootings at the Osh Bazaar (the city's biggest one and located in narrow side roads). (April 13th) 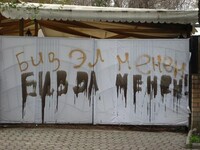 April 14th. Bakiyev might consider a resignation → under the condition of the complete security of his family → interim government does not accept

A civil war between the North and the South could be possible. The de-facto president Otunbajewa talks about it in many interviews. The interim government tries to prevent it by all means.

One hears many positive things, the situation seems to calm down. 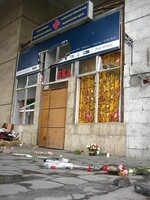 Bakiyev talks to Putin on the phone. Putin convinces him to flee the country. Bakiyev flees to Kazakhstan the next day, later to Belarus. He also sends an official resignation to Bishkek.

Unfortunately the situation hasn't gotten better during the last days. There are some cases of racist excesses and a nasty pogrom atmosphere against Turks and Russians. Especially north of the city people were dragged out of their houses and the houses set on fire. In the city itself, people don't notice much of these things. To a large extent the inner city became safe again.

I hope the situation remains stable and the country doesn't fall back into chaos again… But life normalized completely and I'm going to work again. So I'm really busy with our project.

This was the saddest report I sent so far and the saddest I will ever send. It can't get worse anymore