I already dumped a lot o pictures from our Ireland vacation in my last post but there's one thing at least that warrants its own post. That's our boat trip to the Skelligs.

The Skelligs are two rock islands about 16km from the coast of west Ireland (“S” on the map to the left). The larger one is called “Skellig Michael” and is the only one that can be entered. The smaller is simply called “Little Skellig” and can only be entered by birds and seals.

How to get there

You can best reach the Skelligs from Portmagee (“P” on the map above). Portmagee features a permanent exhibition called "The Skelligs Experience". The Experience Center also organizes boat trips to the Skelligs, however these trips will only cruise around the island. You can not leave the boat. 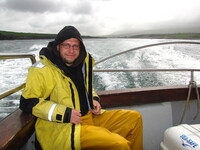 The better way is to go on a private boat trip organized by the locals. There are multiple ways to organize this:

The cruise will take you to Skellig Michael in about 50 minutes, give you about two hours on the island with a guide, will show you Little Skellig from boat and get you back again. Trips start daily at 10am (when the weather allows).

Depending on the weather the cruise can be really rough. I at least was very happy to finally have dry land below my feet again when we arrived at Skellig Michael

There are two reasons why you really should visit the Skelligs if you have the chance. The first are the remains of the early Christian monastery at Skelligs Michael. The site is listed as UNESCO world heritage.

About a 1000 years ago when Christianity came to Ireland some monks decided to live on this remote rock and build their monastery there. The buildings where built in dry stone technique meaning that no mortar was used to build them. They basically just stacked rocks. But what they built back then has survived the years nearly unharmed.

And it's really clever as well – the walls surrounding the central complex guide winds upwards, creating a warmer and calmer micro climate inside. This allowed the monks to grow vegetables in their gardens despite the exposed location. All roofs of the buildings led to canals feeding two rain water cisterns of which one still works today. Personally I found climbing up the 600 steps of the 1000 year old stairs a humbling experience.

So what's the second reason to visit the Skelligs? The sea birds of course. Since we saw Puffins in Iceland, Kaddi and I are huge fans of Puffins. In Iceland we never really came close to them. With maximum zoom we were able to shoot some nice pictures, but that was nothing compared to what we experienced at the Skelligs. The puffins here seem to have no fear of man at all and they are sitting at arms length from you. You can even directly look into their nesting caves. Of course there are other sea birds here as well.

There are no puffins at Little Skellig, but instead there are thousands of seagulls. I have no idea how they manage to refind their nests on that rock…