When I was a young boy — I think I was about 8 or 9 — there was a painting supplies store in our street. One day they had a beautiful wooden box with paint tubes on display. Twelve tubes of different colors neatly aligned and some compartments for brushes. I'm still not sure why, but I instantly fell in love with that box.

The whole box was 25 (East) German Mark. That was my allowance for half a year or more. Buying it from my own money was totally out of question. But I needed new paints for school anyway so I begged my mom and explained how useful it would be for school. She finally caved in and gave me the money. Despite the time — it was evening already, I ran down to the shop bought the box and carried it home happily.

Imagine my disappointment when, a few days later, I wanted to use the paint for the first time in class and only then realized it was oil paint, not watercolor as I had assumed. The box went to some drawer and never saw the light again, for the next 10 years.

I was about 19 or 20 when I had a few spare wooden boards lying around and thought they'd have the right size for being transferred into paintings. I remembered the box and painted my first picture with it's contents. Even though the paint said “Storage Time: 12 Months” it was still good. I did paint a few more pictures and also bought some replacement tubes. But my interests shifted and the wooden box went back to the drawer. 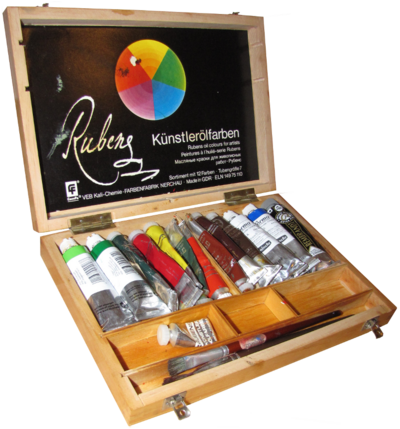