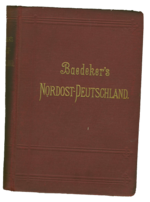 A while ago I picked up a little book at a flea market. It's “Baedeker's Northeast Germany”, a travel guide from 1892. I couldn't pass this opportunity to get a glimpse into a time long ago. Into a Germany before two world wars, at the height of the industrial revolution where a well connected train network made travel for leisure and cultural education feasible for the first time.

This is to share just a few tiny bits from it…

Of course, most parts of Germany were still very rural and didn't match the standards of the modern traveler and so the book begins with a short chapter called “Hints for innkeepers” giving exact details on what is expected from a decent room:

The inner space of the bed, that means the mattress, should not have less than 1m 80cm in length and 90cm width, the blanket should cover the whole bed area, the linen sheets have to be sufficiently tucked in on all sides. […] When placing the bed one has to make sure that the sleeper's face averts the windows; the view at the latter, especially when enlighted by the early setting summer sun, breds headaches.

Sanitary facilities were limited to a wash stand.

The water jug needs to contain at least 3 liters, so you won't need to ring the bell for each drop of water. Next to each wash stand belongs a bucket for used water. In areas where you travel by foot, add an additional bin for bathing the feet.

Here's a bit that still is true for modern hotels:

A huge grievance are thin walls and poor doors which allow noise to travel everywhere, interfering with the guest's right on an uninterupted night's rest. On mountains or remote regions, where the existence of an inn is a merit in itself, one might allow this. Not so in cities, and under no circumstance may such a house […] call it self of the first rank.

And this probably became worse:

The nuisance of tipping developed heavily during the last two decades. Generally too much is given.

The best thing about the book and probably the final thing that made me buy it, is that it contains several pages about Berlin. Here's what to do when you arrive in Berlin 120 years ago:

Arrival. There's a constable in uniform at the exit of each train station who is handing out metal tokens with the number of an available hackney cab. One should immediately call: 1st class! 2nd class! or luggage cab!. Who has luggage, leaves the search for a cab to the baggage porter. Only give the token out of your hand when you placed yourself in the cab and are ready to leave; the coachman may only leave by showing and returning the token. To the baggage porter: for light suitcases 25 Pf.1), heavy luggage 50 Pf. and beyond. Journey from the station to the city: cab 1st class (recommended if you don't have large luggage) 1M 25 to 1M 75.[…] With crowded trains, its recommended to order luggage cabs from the last bigger station via telegraph (50Pf.).

And here are some facts about Berlin from 1892:

Berlin (34-35m a.s.l.), capital of the Prussian state and place of residence of it's highest public authorities, residence of the German emperor, with currently about 1580000 residents2) including 20000 man garrison, at third place of Europe's cities and one of the most important trading places of Germany and maybe first industrial city on the continent. […] contains around 60km²3) with 326 city- and 74 police districts.

For those of you who speak German I scanned some more pages. You know, useful stuff for time travelers like maps, beer house locations and the telegraph office's address…