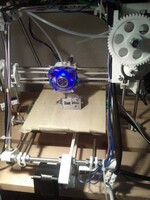 Since my last post about my RepRap Huxley 3D printer, I had some more time for learning how to improve the print quality.

In my first print I had problems with bumps and threads, also making the object stick to the build bed was a bit problematic. After playing a bit with the temperatures I got some decent build quality using increasing the bed temperature to 105°C and lowering the hotend one to 185°C. The difference is easily visible1): 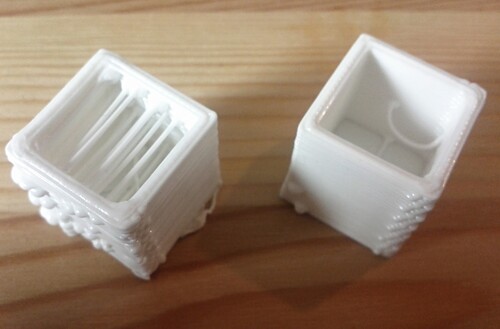 This was the state I was at last weekend. Then I got a email from Onyx Ashanti whom I never heard of before. He found me through Google looking for someone who could help him out with an urgent 3D print job. His Huxley's hotend thermistor had just died and he needed some parts before Monday.

I agreed to let him use my printer and he arrived here at about 1pm. He brought his own G-code files and also a roll of masking tape. Using masking tape on the heat bed makes PLA stick much better and you can work with temperatures around 60°C with no problems. Onyx' gcode files used a much smaller layer height than I had tried before and showed me what my little Huxley is capable of: 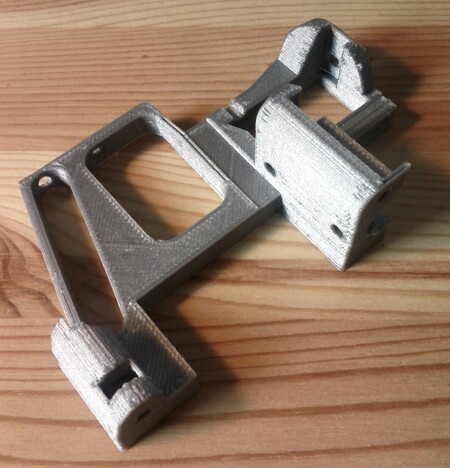 In a 9 hour printing session we printed several parts for his “Beat Jazz” music controller. Here's a video of him using them:

One thing I learned from Onyx is that having a second fan for cooling the printed layers is essential for printing clean overhangs. For now I'm using an old Intel CPU fan, but already ordered some fans that should be easier to montage to the printer's frame.

I also had a look at using Slic3r instead of Skeinforge and had quite good results. I find Slic3r much more intuitive to use and a whole lot faster than Skeinforge.

Using this config I was able to print the Stanford bunny in 0.15mm layer height (I scaled it down to 50% size in Meshlab). My fan isn't ideal yet, so the ears are a bit fuzzy: 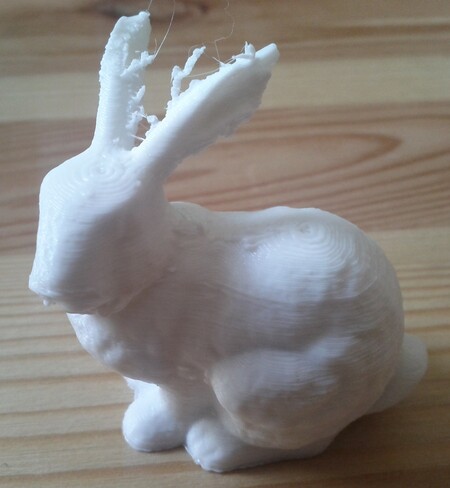 1)
even though the photo quality isn't ideal