They say one of the first thing people do when they get a 3D printer is improving it. I guess that's true…

As I wrote last week, a fan for cooling the printed parts is essential when printing bridges, overhangs or just smaller parts. Until now I had some temporary fan salvaged from an old CPU. It worked but needed constant adjustments and had to turned on manually instead being controlled via g-code.

So I began my quest to add some cooling fans directly to the Huxley's design. 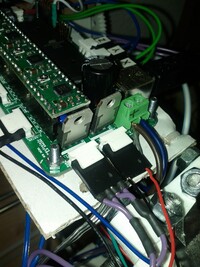 The first question was if the Huxley's electronics can control a fan. After some discussion in the eMaker forums it turned out that at least the RepRapPro version with the Sanguinololu electronics does have the fan control built in by default. 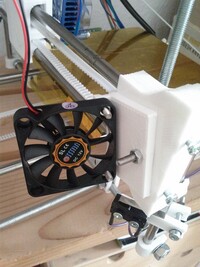 For mounting the fan to the Huxley I found a nice and simple solution at thingiverse: eMaker Huxley Part Cooling Fan Mount by “richgain”.

This works great, but blows air towards the print from one side only. This wasn't good enough for certain prints I tried. I needed airflow from the other side as well.

The cool thing about richgain's solution is that the fan moves up and down with the x-axis and thus always points to the top layer. I wanted this for the other side of the print, too. This meant I needed some solution to mount a fan on the x-motor side.

After some thinking I had an idea of a bracket reaching above the x-motor. Now I just needed to model it. I made my first attempts in FreeCad which started out good but then the darn application kept crashing and I gave up. 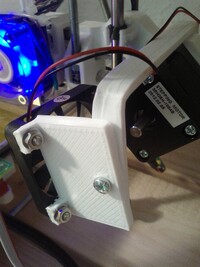 Instead I tried Tinkercad, a WebGL based, simple CAD tool that works directly in the browser. It's really easy to use and 15 minutes later I got my model.

Details for using the mount bracket are available at Thingiverse now.

This means I published my first thing on Thingiverse and my printer now has a dual cooling system controlled via gcode. Excellent