Know what this is? 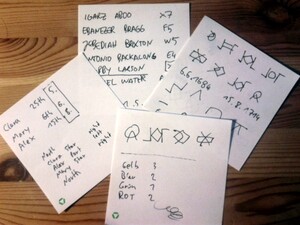 All of them are indie games that can be bought for just a few bucks at Steam. Below you can find a short overview of the ones I liked most.

You wake up in a unknown mansion with blood on your clothes and no memory of what happened. As the title suggests, your goal is to go home. On your way back you try to reconstruct what happened.

Home is categorized as a horror game and it's certainly very spooky. It plays in the dark the whole time and only the bit around your mouse pointer is illuminated (by your flash light). I highly recommend to play it with headphones for an even more intense feeling.

The most interesting thing about Home is that it will change depending on your decisions in the game, making it possible to play it multiple times with different outcomes.

Even though you can play through the game in about an hour, I guarantee you that you will think about it for many more, wondering what exactly happened. You're encouraged to share your ideas with other players on a website revealed at the end of the game.

Jolly Rover involves pirates and a voodoo curse. But no, it's not a cheap Monkey Island ripoff. For some reason all the characters are anthropomorphic dogs which feels a bit tacky for the first few minutes but later fades into the background.

The story is simple but works: you're a good honest guy that get's ripped off by the baddies and is forced into an adventure. Of course he defeats the bad guys, finds the legendary treasure and gets the girl in the end.

Generally I found the game quite simple, but it also has a builtin hint system that will help you out if you're really stuck. I really liked the system of casting magic spells by using a system of symbols (that's part of my notes above).

This is by far the best looking game of them all. You're the somewhat naive but heroic captain of a police space ship and pick up a distress call. Following that call gets you sucked into an big conspiracy that you will unravel and bring to fall in the end of course.

During the game you meet more characters you can play. In the end you will need to switch between three characters to solve certain puzzles.

Similar to Monkey Island 2, this game gives you the choice of two modes: Experienced Adventurer or Casual Gamer. Of course I chose the first one. But even in this mode I played through it in about 3 hours, which is a pity because I really enjoyed my self here. The only other thing that could have made that game better would have been a voice track.

The Blackwell Deception seems to be at least the second game in a series, but was the first of them I played. You're Rosa, a psychic private investigator who is able to see ghosts. Which is quite handy because her partner Joey is one

. Together the two try to solve the murder of a former colleague of Rosa.

The game is parted into multiple acts which introduce new characters and locations. In each act one or more lost souls need to be helped so they can go through the light.

I really liked this game. You can always switch between Rosa and Joey, with Joey having some interesting perks. He can walk and look through walls, but can't interact with anything except for a slight wind. So he can look at things Rosa can't reach but he cannot pick up anything. This allows for some new puzzle solutions you haven't seen before.