Nobody knows where it came from, this exotic matter (XM) that is invisible to the human eye. But the portals seem to pop up at great pieces of art, culture and creativity. It's not clear if creativity creates XM or if XM creates creativity, but they seem to be related. There are people who try to fight back this seemingly alien invasion. But they don't understand the chance of embracing the change. The chance to improve mankind with this new technology. The chance for enlightenment… 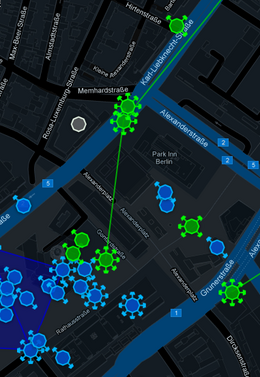 Sounds strange? Welcome to the world of Ingress. A new alternate reality game by Google's Niantic Labs also known for their Fieldtrip app.

Ingress is an Android game that plays in the real world, making the alternative reality visible on your phone using Google Maps technology. Your goal is to capture portals and charge them with Exotic Matter by attaching resonators to them. Once a portal has 8 resonators it can be linked to other portals, forming triangles. Population inside the triangle is thus won to your side – either the Enlightened or the Resistance.

The game is currently invite only. You can register your E-Mail address and wait, or you show some creativity and send some game related art towards Brandon Badger or Jen Hsieh on Google+.

What you should keep in mind though is that the app is in beta right now and that shows. It is very resource intensive in any possible way (battery, RAM, CPU) and just barely works on my Nexus S. I hope a future update will bring some LoFi version with less eye candy but better performance on older devices.

Nonetheless I'm playing it for two days now and am hooked. Ingress gives you a cause for moving your ass outside and it is strangely satisfying to finally connect those portals.

If you'd like to learn more, here are some good articles:

So don't wait and join the Enlightened!