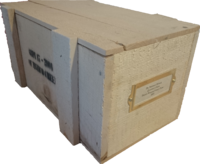 A while ago, I wrote about a curious letter I received and how with a bit of googling, I figured out what it was.

The letter was the first of more to follow, all part of a “Mystery” bought by my girlfriend at the Mysterious Package Company for me.

From time to time I get angry mail and comments about how my original blog post “spoils the fun” because it's now easy to figure out what's going on by a quick google search. I find that a bit silly, since it's a blog post about how I used Google to figure out what the letter is about. So my blog post may have made it a bit simpler, but as I wrote – the mystery was solvable already before my post.

Nonetheless I redacted the names and identifiers in my original post. But Google continued to find my post anyway. So today I created a robots.txt entry which should remove the post from search engines altogether.

However sometimes people ask how the thing continued and if I spoiled it for my self by googling. So here's a bit of a review on the mystery I received. If you currently have your own mystery going, you might want to stop reading here.

First things first: did I spoil the thing for myself by googling? Not really. As soon as I realized what it was, I stopped reading. So I knew that it was some kind of game, but I knew nothing about the details.

There wasn't much to do with the initial letter. So I waited for the following one which came roughly 2 weeks later. It contained various snippets of a letter on various papers of different origin. Bringing it in order revealed much of the story going on. It was basically a time traveling mystery with those letter pieces having been sent by a time traveler from various times.

The quality of those items was superb. Everything looked genuine and with a bit of googling I was able to reconstruct the approximate times and locations where the letter pieces came from. I set up a wiki and collected all the information I had. I created a Google map with the locations and times. I was eager to solve this.

However even with the info I gathered, there wasn't much to actually do. The time traveler's letter told me that I needed a “map” which would be sent to me.

So I waited another two weeks til I received a letter from my local customs office. They had held a package and needed me to come in to qualify its contents. Turns out the Mysterious Package Company failed to properly declare this1). Luckily I was able to convince the customs officer that the stuff was indeed only worth 20 dollars.

The package again was of marvelous quality. It came in a real wooden box (pictured at the top). It contained several letters and triptych with stars on it. Of course this had to be the “map” I was waiting for.

Again I turned to my wiki, added more of the info I gathered from the letters and then began to identify the constellations on the map. It took me quite a while, but with the help of Stellarium I was able to not only identify the stars, but could also approximately say where and when this sky configuration could have been seen.

However, there was still nothing I could do with this information. So I eagerly waited for the next letter. 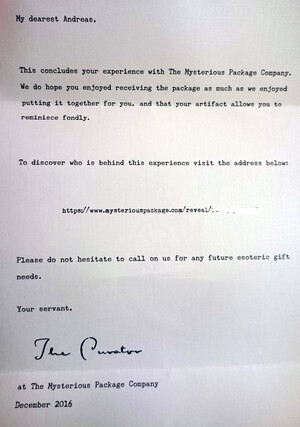 When it came however, it was a bigger disappointment than discovering it was all a game in the beginning by a bit of googling. That was because the last letter basically just revealed that this had been a Mysterious Package Company thing and that I could log in at their website to see who sent it to me.

It was over when I thought it was finally beginning. There was nothing to solve at all. There was no resolution.

So what's my verdict?

The quality of all the items I received was excellent. Everything looked real. Not like a cheap imitation. I really enjoyed the mystery even though I knew it was a game. Trying to figure it all out, finding the hidden clues, all that was a lot of fun. But I can't help to feel a bit disappointed by the end. The whole story forced me into passivity.

It is unfortunate, it seems like a wasted opportunity to create a real riddle that could be solved by the receiver.

1)
it should have been marked as a gift with proper papers for the value of the contents, instead it just said “Statue $20CAD”