I initially posted this on Google+, but why not make it a proper blog post?

Yesterday Google IO 2013 started and as usually came with a whole bunch of announcements. My general verdict: nice but often half assed.

Let's have a look at the details.

Google Play Books allows you to upload PDFs and ePub. That's great and what I asked for two years ago. Unfortunately there's no way to organize your books. No sort by author or title, no way to edit book metadata or the cover image. Many Android ebook readers do a better job here. And again a new quota was introduced (1000 books) instead of adding the books simply to your Google drive (and be able to sync them to your Desktop that way).

Google Hangouts replace Google Talk. It might be the unified messaging we've been waiting for? Only that there seems to be no Google Voice integration or integration of SMS services (or at least phone number matching similar to Whatsapp). And Google Voice is still not available outside the US. At least you finally can share photos to your contacts. But it's still rolling out so I couldn't try it yet. Biggest question remains: is it still XMMP based and works with 3rd party clients? We'll have to see.

Update: The Verge writes: With Hangouts, Singhal says Google had to make the difficult decision to drop the very “open” XMPP standard that it helped pioneer..
Fuck that!

Google Plus' new layout was an unnecessary change IMHO. The three column layout is somewhat harder to scan and the single column layout looks just broken. And sometimes the three columns simply won'T work at all and you get a huge gap in your stream. The delay in the sidebar revealing is most annoying. You tend to click, then suddenly the sidebar pops up and you're taken to a place you didn't want. Being able to post without scrolling up would be nice as well. But I guess I'll get used to it. 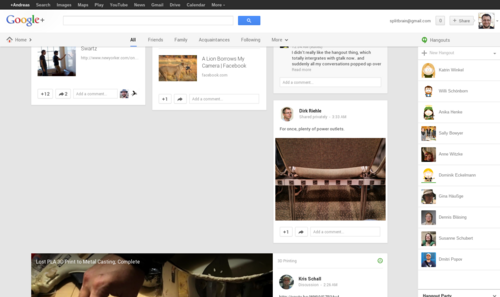 Photo Auto Awesome tools I haven't tried yet, but unless I have space in the range of half a terabyte at Google it won't become my primary photo storage anyway. So I don't really care at all.

Send money via Google Wallet. Yeah finally a Paypal competitor. But wait it isn't. It's fucking US only. Useless.

Google Nexus S4 (not listed yet). Uhm, a rebranded Samsung S4 without the Samsung crap. Hmm, nice but at the price tag of $649, I'm not sure why to bother when the excellent Nexus 4 is so much cheaper. But hey, the more Nexii, the merrier.

Speaking of Nexii. I was really hoping for an updated Nexus 7. Nothing there it seems. Too bad.

Android Development Studio based on IntelliJ. Yeah! I love IntelliJ and having this download and start, all-in-one package should make Android development much easier than before where the set up of the whole Android Eclipse tool chain took some time. Though I wonder if this somehow integrates with an existing IntelliJ Ultimate install.

PHP for AppEngine (not sure if this was announced at GoogleIO or before). Still an exiting new platform, though I don't think we'll see DokuWiki on AppEngine soon, since the one thing we really need is a file system. Still interesting but currently invite only. 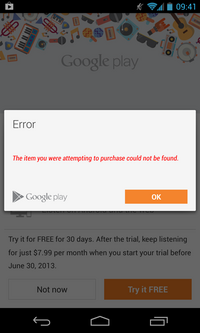 Google Music now has some kind of streaming service. At least that's what a large popup says when I go there. But all I get when clicking the “Try now” button is “Server Error”. Same in the Android App. Is this even available outside the US? It's priced in USD only, so I wonder. The new Android app looks okay'ish, not sure if the card metapher is the best way to represent artists or genres though.

That's what I think about this year's announcements. I can't help to feel a bit underwhelmed. What about you?