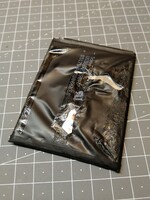 My trusty Honor 9 phone recently split open at the back from a swollen battery. It still worked fine, but carrying a something in your front pocket that might decide to explode and burn a hole in your privates was a bit scary. So after living with it for weeks, I finally decided to order a .

Update: turned out that the battery off Amazon was total crap with only half the nominal capacity and deteriorating fast. I ordered another one from AliExpress and so far it's holding up well.

Replacing it turned out great. I basically followed this (German) video:

Isn't it wonderful that you can learn how to do basically anything from YouTube nowadays?

Opening the back was easy since it was already mostly open anyway, but getting out the old battery took a little force. The tools that came with the battery where actually helpful, even though not super high quality.

I'm glad it worked. I didn't want to replace this phone, yet. It's still running just fine.