I don't get much done these days besides working on the house. But yesterday evening, I did do a little project.

As you know, working with music is much better than without. So I needed some way to have music at the construction site.

Normally, I would just fire up Google Music on a Google Home speaker, but there's no Internet and no WiFi. The old school option would be listening to the radio, but doing that for prolonged times makes you go insane from too much advertising, stupid radio host chatter and repeating playlists. Streaming music via my mobile isn't an option either because data caps. There's also not enough storage on my phone for a decent offline collection. I needed a standalone, offline MP3 player.

So I went through my “obsolete hardware” drawer1) and picked out an old Raspberry Pi 1b, a Touchscreen and a broken Bluetooth speaker.

The speaker had a broken MicroUSB connector so it wouldn't charge anymore. I opened it up and cut off the LiPo battery. I soldered the battery contacts right onto the Pi's GND and 3.3V ports. 3.3V is still within the voltage range of a 4.7V LiPo, so I expected the speaker to be able to work with that and I was right. 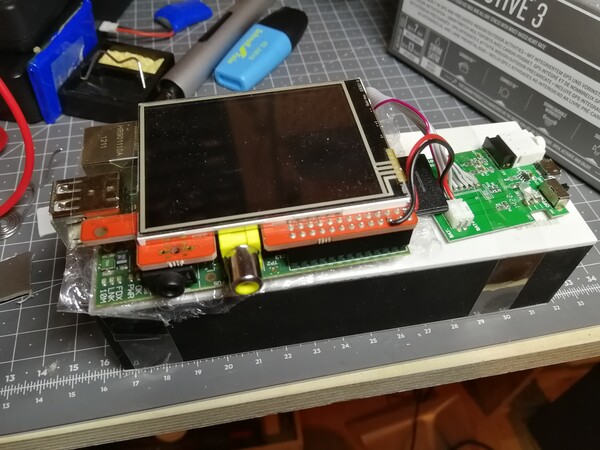 Since the RPi 1 has no Bluetooth, I used a short AUX cable to connect the audio.

And since everything uses MicroSD cards nowadays, I also had an unused 64GB full size SD card available. Enough to hold Raspian and nearly my whole MP3 collection.

On the software side I struggled a bit to find anything suitable for the tiny 3.2inch touchscreen until I remembered my own pimenu project. I installed MPD - the music player daemon and call it's mpc command line tool from pimenu. Simple.

Finally I put all of it into a box I found in our recycling bin2). A generous application of Scotch tape holds it all together. 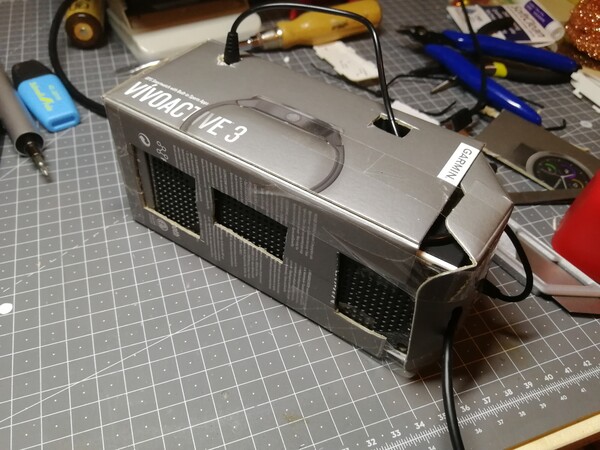 I now have a relatively compact, trashy looking, offline jukebox for the construction site. 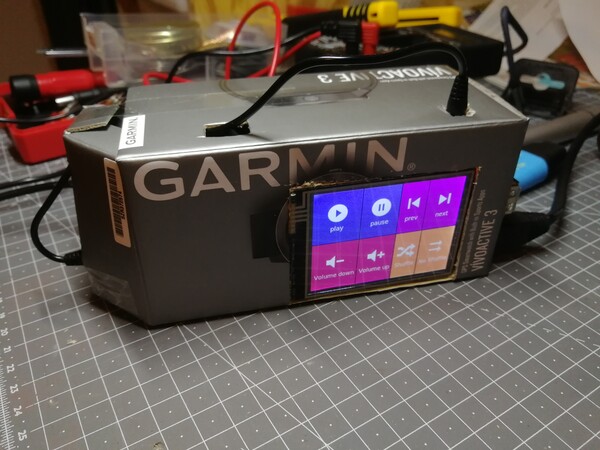 1)
yes, I really have a drawer labelled like that
2)
No time to design and 3D print a proper case