20 months ago I blogged about…

A few weeks ago, I finally got a table saw. I was lucky – a local shop had it on offer for a reduced price because the box had been damaged. So I got for a hundred bucks less than usual

The saw I bought is a Bosch GTS 10 J. The J stands for “Job Site” so it is meant to be transportable. But for me it will have fixed place in my workshop.

In fact I wanted it to be a permanent part of a work bench. And that's what I built over last couple of weeks…

The saw comes with a fence of course. It works reasonably okay. It uses two rails - one on the front and one on the back. The problem is that these rails are also used when you extend the saw by pulling out part of the table. 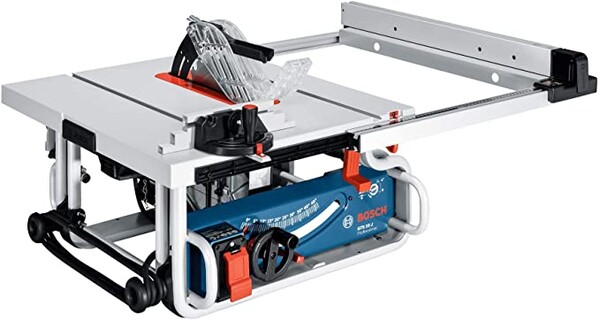 In the picture above, the table is fully extended and the fence is moved to the far right. But as you can see, the fence rail now starts somewhere at the right of the blade. This means that if you want to cut a thin piece, you need to move the extension back in to be able to have the fence close enough to the blade. That's fine for a portable saw, but annoying for a stationary saw.

Additionally a back rail is somewhat cumbersome when you want to embed the saw into a larger table. To accommodate the back rail, you'd need to keep a gap in the table.

My decision was clear. I needed a different fence system. However there seems not to be any 3rd party fence system for sale in Germany. And the few I found abroad where close to what I had paid for the entire saw!

The only solution was to build my own. I decided to use a system I found in a video by Elias Stratakos in which he uses two interlocking 45° bevels to have the fence pull itself straight when fastening.

However I wasn't confident enough that I'd be able to satisfyingly reproduce his locking mechanism. Instead I opted for a much simpler solution: a simple toggle clamp.

I constructed the fence and rail from 18mm birch plywood using liberal amounts of glue, screws and lots of clamping. The rail is mounted directly to the work bench and the front of the saw (I had to drill some holes in the aluminium table).

The fence itself is made from three sheets of plywood glued together. At the end I put a piece of thin plastic which helps to keep it hovering slightly above the surface.

The fence works really well. It's parallel, easy to use and keeps its location as it should. However there is room for improvement:

After I had solved the problem of the fence system, building the bench was relatively straight forward.

The construction is quite simple: a top and bottom frame built from 6x4cm lumber that are connected by four 6x8cm legs. Each leg is put on top of a double caster with brake mechanism. Each caster is rated for up to 110kg, so it should be sturdy enough.

I used my new pocket hole jig for most of the connections. For some I even did some simple joinery (using the table saw of course

For the bench top I picked the cheapest real wood option I could find: a 20mm 3-layer spruce board.

The cut out for the table saw was done with a jig saw - it fits perfectly. To mount the saw, I not only had to remove the extension and rail system but also the hardware that holds the rail in place at the front. I'm not sure what I will do with these pieces – maybe someone on eBay might be interested?

The saw itself is placed on a shelf. To mount it at exactly the right height, I used the same trick I had already utilized when building the miter saw stand:

Because the whole workbench is relatively large compared to the size of my shop, I decided to move my dust collection system under the bench and deconstruct my dedicated vacuum cart again. Saves me a bit of floor space.

I'm not done with the workbench, yet. Here's what I plan for the future.