22 months ago I blogged about… 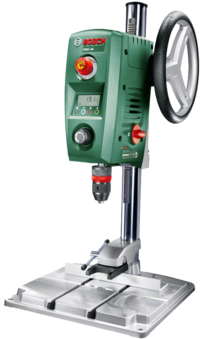 One of the last larger machines I was missing in my workshop was a drill press. I was eyeing the Bosch PBD-40 for quite some while but was waiting for a sale. This year's Amazon Prime Day finally was the opportunity I needed.

The PBD-40 seems to be a very popular choice among (German) hobbyists. But there's one thing that people generally point out as not ideal: a wheel handle instead of the more usual turnstile.

I gave it a try and I agree. The handling is less than optimal. However a turnstile uses more space than the wheel. And adding one also means a somewhat larger modification. So I was very happy to find a different alternative in the design by Michal Batorowicz which adds a handle to the existing wheel.

I printed and attached it to my machine and it was good. However as soon as you move the machine higher or lower on its axis, the handle is no longer in an ideal position. I also found it a little too long to work with my space restrictions (recreating the original problem of a turnstile).

So I decided to create my own solution. My design uses three knobs but closer to the original wheel. This fixes both problems I had with Michal's design. There's always one knob in the right position and nothing protrudes further out than the machine's base.

The workshop isn't big. There's not much space to permanently place a drill press without being in the way. On the other hand I did not want to move the machine in and out of storage whenever I needed it.

The solution was to integrate it into my storage in a way that makes it still easy to use: mounted on a slide out drawer.

To create the drawer, I bought two heavy duty drawer slides. Instead of putting the shelf between them, I used two 6x4s and mounted the shelf on top - much easier to assemble and it also somewhat protects the slides from dust.

Unfortunately I did not pay attention and bought slides that have no locking mechanism. So I used some simple latches to fix the shelf in the out position. Works great.

Underneath the shelf I made a little box to attach my shop vac. It sucks air right through the base plate – I don't know how useful this will be in the end, but I thought it worth a try.