One of the advantages of living in Berlin is to have a cinema showing movies in their original language. Unlike most other European countries, Germany is a big enough market to synchronize movies for the cinema. Usually the quality of the synchronization is quite good, but still I prefer to see movies in their original language. Well at least if that language happens to be English

But because most people prefer the German versions, it's harder for me to find some company to go to the movies. This is one of the reasons I'm not that often in the cinema. More reasons are the bad movies of recent months, the money (to a lesser degree) and me being too lazy to get my ass up, order tickets and drive through the half city to the cinema.

Nonetheless I was in two movies in the last weeks and will probably see at least one, maybe two more in the next weeks. The sad thing is, they are all sequels or have a crappy story or maybe even both

. Still, I had fun at the previous ones and expect to have more at the upcoming ones… I guess I just have a weakness for crappy movies.

So what have I seen?

A week ago or so I've been to Pirates of the Caribbean: At World's End. Part three of the series. I absolutely loved the first one. It was a refreshing new and self-contained story. Johnny Depp was marvelous. It was fun and – most important – it had pirates! Release of part two was a surprise to me because I did not expect a continuation – after all, part one had it's happy end already!? As expected, the story of part two was crappy, but at least it had pirates…

So, why go to part three? Well, it still has pirates

. And somehow they managed to continue from the crappy story of part two and make it a bit better. The movie still not matches the greatness of the first one and I sometimes got the feeling Johnny Depp is tired of the role. But still, World's End is an enjoyable way to spend an evening and the ending has its surprise.

The second movie I've been to was Die Hard 4.0, yesterday. The movie is another example for a trend I seem to see in modern cinema: the loss of a need to be realistic. For sure movies are not about being realistic, especially not the “Die Hard” series. Bruce Willis' ability for being hit and shot, walking barefooted on broken glass and still being able to kick the bad guy's ass is something that made the movies that great. But still, the previous movies had some realism in it. You knew that it wouldn't be possible in the real world, but you were able to think “well he's a tough guy, I just believe it”. In modern movies, nobody seems to care about that anymore. 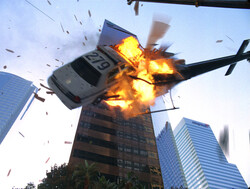 So mister Willis aka. John McClane lets a car jump into a helicopter (me thinking: “okay, he was just lucky”). Then the bad guy falls from the exploding helicopter and stands up to phone his boss with his still working cell phone (“whoa tough guy, good phone”). Later Bruce drives an SUV through a glass wall hitting the Kung-Fu bad chick frontally (“okay, she's done”). But she grabs the windshield and stays atop the hood while Bruce keeps driving through multiple walls and an elevator door. Of course the Kung-Fu girl is still able to fight while the SUV hangs head down the elevator shaft (“whoa, Terminaor-babe”).

Later the car vs. helicopter scene is repeated. This time using a jet fighter and a truck. Because Bruce Willis wouldn't have a chance to reach a flying F-35 they gave it some mystic hover powers (think Harrier Jump Jet). After a lot of shooting and missing McClane, the fighter lowers to hover a few meters away from the truck. Meanwhile our hero drives the car up a ramp to an elevated driveway (“tough guy – the truck is a piece of junk by now”). The driveway then collapses and the jet is hit by some concrete. The pilot uses his catapult seat to exit the now uncontrollable aircraft. At this point I already had surrendered and stopped trying to rationalize anything, which was a good thing because Bruce Willis was still in a truck on a collapsing drive way. But no problem, he just did some nice Jump'n'Run style escape: from the truck, to the plane's wing, to safe ground, on to kick the bad guy's ass

Still the movie works. It's a great action movie and the characters are real fun. If you're somewhat into geek culture you will love the hackers shown in that movie. Of course all the “hacking” and the computer equipments shown is stupid (“yeah a server room full of blinkenlights”). But that is normal in movies anyway and a minor annoyance compared to the afore mentioned fighting scenes.

So what's on my list to watch next? The new Harry Potter of course and maybe another crappy but possibly fun movie: Transformers.