This weekend was quite busy for me. Kaddi and me are looking for a new apartment, so most of time was spent with the flat hunt. But there was still some time for culture in the evening.

Another legend of Reggae was playing where I just recently saw The Skatalites. This time it was the 72 year old Lee "Scratch" Perry.

The concert wasn't bad, but not as good as I hoped. What really sucked was that we had to wait full two hours until Perry was on stage. While we waited for the main gig, the SoundPirates sound system did a great job at the turntables, but after all we were there to see a live show, not for a disco.

Anyway, it was cool to see a living Reggae legend and Frank and me still had a fun evening.

Indiana Jones and the Kingdom of the Crystal Skull 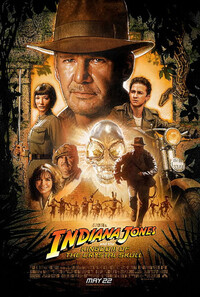 Yes, I saw Indy 4 on Sunday. And I loved it. I know that many people where disappointed, but for me the movie worked very well in the tradition of the previous ones.

I will not tell anything about the plot here, because I don't want to give any spoilers. But so much I can tell: Like the movies before this one captures the spirit of its time very well. It's the 50ies with the hysteria of the McCarthy era and the government is seeing communist spies everywhere. So Jones not only has to fight the stereotypical villains (the Russians) but also gets in trouble with the FBI.

Of course the main plot is the hunt for an ancient relic that might change the power balance of the world when put into the wrong hands. There is a lot of the typical Indy adventure stuff like finding hidden switches for prehistoric mechanisms, deciphering ancient languages, lots of references to all kind of historic myths and facts (and previous movies), being caught, escaping and being caught again by the villains, jungles, tombs, snakes

, chases, fist fights and everything else you'd expect from an Indiana Jones movie.

And like in the previous movies there are many exaggerations and goofy moments, where the movie doesn't takes itself too serious. There are many people who think Spielberg overdid it this time and I can understand them, but for me the movie still did its magic and I had a lot of fun watching it.