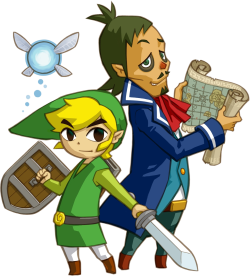 I just finished what was probably the best game in 2007: The Legend of Zelda: Phantom Hourglas.

I don't know where to start. This was a most excellent game in all areas. The graphics are beautiful. The story and characters are interesting and vivid. And the controls are quite genius.

The main story is simple: Your girlfriend Tetra aka. Zelda gets kidnapped by some evil monster. You (aka. Link) set out to rescue her. Of course there a lot of side quests and steps to solve until you finally free her.

The whole game is controlled with the stylus. Unlike in other games the stylus is not used like a mouse pointer where you have to click various menu items to execute different actions. Instead everything is controlled through gestures. Eg. you point somewhere and Link walks towards this direction. If the point is close to him he walks slowly - point to a distant location and he starts to run. Click a monster and Link does a straight attack. Draw a quick circle around him and he swirls his sword for a circle attack. It's all very intuitive.

Nintendo made sure all features of the DS hardware are used. There are even riddles which require you to scream or whistle in the microphone. For others you need to draw some magical sign to open new paths. At one point you even need to close the DS for solving a task. One feature I'd love to see in more games is that you can annotate all dungeon maps by simply writing on them.

Dungeons are placed on different islands. While exploring those islands or dungeons the game uses an isometric perspective. To travel between the islands the game switches to a 3D view. Your ship follows a route you set on a map. You control the view and the ship's cannon.

The ship's hit points can be increased by combining various parts you can find during the game. Those parts can also be shared during the multiplayer WiFi mode. This modes provides 10 different battle areas with a game somewhat similar to Capture The Flag. You try to carry “force crystals” to your base while your opponent tries to catch you. What drove me mad here were people aborting the game whenever they were about to loose

To sum it up: if you're still wondering what DS game you want for Christmas - get Phantom Hourglass!