16 months ago I blogged about…

Some Thoughts on Cyberpunk 2077 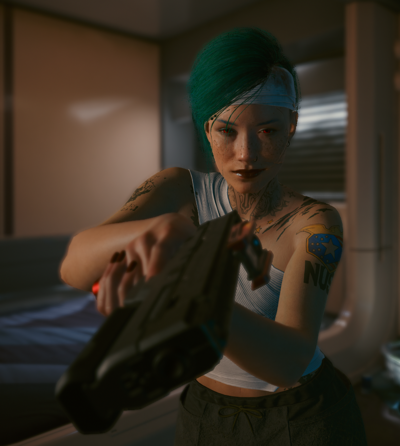 As many others I was excited for Cyberpunk 2077. I absolutely loved “The Wither 3” and I was always a fan of Neuromancer and Blade Runner.

However when the game finally came out, I didn't buy it right away for multiple reasons. One was the steep price of 60 EUR, then there were lots of reports of bugs at launch. Most importantly I wasn't sure if my computer would actually be able to play the game.

So I'm probably one of the last people to actually jump onto it, with having bought the game just two days ago. For a much more reasonable price of 25 EUR at Kinguin.

After having played for about 12 hours so far, here are some thoughts. I try not to actually spoil anything.

Cyberpunk 2077 works decently well without any tweaking on my 4 year old hardware. And it looks fantastic. I only tweaked two things: I disabled the “movie grain” and motion blur settings. Both made it somewhat hard to actually focus on anything, but that might be more my perception than a hardware/performance issue.

Just like the Witcher, the game is an open world game. Nothing is strictly linear and usually the writers account for things not being done in the “right” order. For example one of the NPCs promised me a reward early on in the game, but I only remembered when they were already dead. Nonetheless I could pick up the icon from one of their associates and even got an option to talk about their death.

However on other occasions I felt like I was missing several steps in the story somehow. Eg. the way how my relationship with the Delamain AI progressed from a cold “I only do what I was paid for in advance”, to “sure I pick you up from outside the service area” to “we're kinda friends, please help me” basically happend in the only three times I talked to them.

In general the writing is fantastic and it feels like there is a genuine connection between the characters. This was what had made me love the Witcher so much and I am happy to find it here again.

The occasions where it doesn't work, stick out like a sore thumb though. This “sticking out” is maybe my main gripe with the game. It destroys the immersion when people behave in a way that makes you think you somehow missed several parts of the story in between.

Most notably, this happens with the relationship to Johnny. It goes from “I want to kill you” to “Hey let's work together” in what seems like an instant.

If you followed any of the Cyberpunk pre-release hype you know Keanu Reeves is in this game. He's Johnny and he's a pretty important part of the game. But whenever he comes into play, I immediately think “oh it's Keanu!” which kinda ruins the immersion again. As much as I like Keanu, I wish they hadn't put him in the game that prominently.

Others have written about the death of the cyberpunk genre before. The gist is, the dystopian future of the early eighties is much too close to our everyday life to be “enjoyable” anymore. It was a warning we didn't heed and are now living the consequences.

For Cyberpunk 2077 that means that is super easy to forget that this game is meant to be the future. Driving or walking through Night City is often just too familiar to evoke any feelings of Science Fiction. It doesn't even have flying cars as far as I can tell.

Hacking and using the cyberspace is an important part of the cyberpunk genre. So when I built my character, I put a ton in points in that part of the skill tree. However most of the game is basically a shooter and so far I haven't encountered many situations where hacking proved a useful way to win fights.

So after all, this game will not win a place in my heart and memory as the Witcher 3 did. But it's still a solid game with tons of content. I'm complaining on a very high level here. It will keep me entertained for many many hours, so it's still 25 bucks well spent.