The last upgrade to my main PC was about 4 and a half years ago. The hardware was holding up surprisingly well (still allowing my to play recent games like Fallout 4, albeit at a lower frame rate). However, I'm a fan of the Battlefield series and their most recent release looked too nice to not play it.

I initially only bought a new GPU and that was good enough to generally play Battlefield. But the experience wasn't great. The CPU clearly became the bottleneck. And since upgrading the CPU also meant a new mainboard and a new mainboard meant new RAM, I ended up buying a lot of new hardware.

So here's what I'm running now: 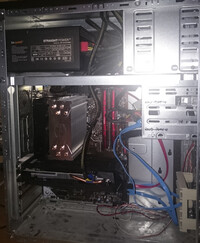 As you can see, I opted for upper mid-range instead of a hardcore gaming rig. Not all of the hardware was bought this time. Some of the components I have for a while now. However I'm doing something I've never done before - I'm running the CPU overclocked to 4.1Ghz. It's just a single setting in the bios and the huge cooler easily keeps the temperature down to 45°C even during full load. UserBenchmark seems to like it.

Because my Windows 7 really didn't agree with all the new hardware, I also bought a Windows 10 license (18€). After disabling all the privacy crap that comes with it1), it's quite a nice system.

So after spending 830€, it's nice to see that I still suck at Battlefield