A large number of items in Apple's iPhone AppStore are games. In fact there are so many games that it is hard to find the few gems there. That's why I want to share three games I enjoy on the iPhone. 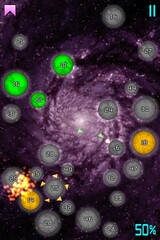 Galcon is described as “arcade action Risk with planets”. The game is very simple, you start with a planet that produces space ships, those ships can either be used to defend the planet or can be sent to capture other planets, which will then produce ships as well. The bigger a planet is, the faster it produces ships.

The goal is to capture all the planets of your opponent. The game actually exists for various platforms, but the touchscreen of the iPhone really enhances the action of the game.

I only played the free “Galcon Lite” version so far. The 3.99€ version adds a phone-to-phone and internet multiplayer mode as well as various other features. 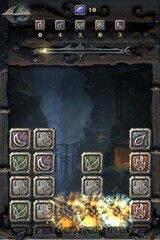 The Beginning is actually a free promotion game for a not yet available iPhone MMO game. When the real game will have the same quality and addiction factor like this promo game it will be a huge success.

Aurora Feint The Beginning is a action/puzzle game which has some similarities to Tetris. You need to clear blocks displaying different element symbols by aligning three of them in a row.

What makes this game so addicting is that the developers added some kind of RPG system. By “mining” elements you gain experience points which then can be used to buy upgrades. This could be better skills (like earning more experience per cleared element) or special items. 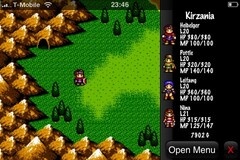 Vay is not a new game. It was released 1994 for the Sega CD console and was now ported to the iPhone. And this is a huge advantage for the game. Unlike most games in the app store which are rather small and targeted to occasional players, this is a *real* game with hours of gameplay.

Vay is a classic Japanese RPG. You're the prince of a medieval country and on your wedding day, some attackers kill your parents and kidnap your wife. Only some mythical artifact can help you to get her back… nothing new here but the story is well executed and even comes with a few video cut scenes.

The developers took some time to make this game work well on the iPhone. All menu items to access your stats or to change your equipment use the standard iPhone UI elements. The game autosaves automatically whenever you leave it (or you get a call). For 3.99€ you can't go wrong with this title I think.


What are your favourite iPhone games? Please let me know in the comments.