Time again for a game review. My latest acquirement is Overlord 2 for the PlayStation 3. I haven't completed the game yet, but have probably seen at least two thirds of it so far.

As the name suggests you're playing an dark evil overlord, trying to conquer the world and suppress the peasants. You control your alter ego from a third person perspective. The camera is usually placed right behind you but can be freely rotated around you. But since you're an evil overlord, you'll of course let your minions do all the work for you.

Minions are fierce little creatures that can be summoned from the Netherworld at special minion gates. There are four different minion types: browns, reds, greens and blues. You start the game with the browns only.

The minions are controlled with the right stick by sweeping the whole horde of them in the directions you want. The minions are much faster then yourself and (because they are smaller) can reach areas you can't. The minion controls are the most important one and Codemasters did a great job here. Sweeping the horde is simple and elegant. Luckily you don't need to order anything else - once running, your minions will know what to do: attack enemies, wrack havoc, carry items to you or operate switches and machinery.

Of course your alter ego isn't exactly helpless himself. Except swinging his huge axe (or other weapon) he also can use magic. During the game several spells are unlocked. The most important one is available from the start though - the ability to enslave peasants. Such slaves then will follow you and automatically attack any enemies. When you enslave townspeople they will also work for you by mining for gold, farming animals or mixing cocktails for your minions (yes!).

Unfortunately I found the controls for magic beyond the basic enslave spell too complicated. All spells are executed with the square button in combination with various other buttons, but in the middle of a fight I never could manage to find the right buttons. Magic controls are the only thing that really didn't work for me. Luckily enough the game is solvable (and survivable) with out too much magic use so far.

The levels on the other hand are very good. They are sufficiently big and range from the snowy norths, over woody elven grounds and magical waste lands to the tropical city of Everlight. To get through a level you often need to combine the different skills of your minions. Not only to fight the various enemies but also to get around the landscape's hazards. It is also recommended to revisit areas when you gain new abilities (eg. minion types) as it might give you access to secret areas you couldn't reach previously. Except for one very frustrating level, the game was very well balanced so far.

The skills of your minions differ by color. The browns are just strong fighters with no specials, the reds are fire proof and can attack with fire bolts from the distance. Green ones are immune to poisonous gases and become invisible when gathered. From their hiding place they can launch very powerful backstabbing attacks. The blue ones finally are the only ones who can swim. They are also completely invisible while moving and can be used to run through enemy lines and enable switches.

All(?) minion classes can ride some kind of animal. Additional to strength, mounted minions gain new abilities, wolf riders can jump across abysses for example. For the arachnophobics beyond my readers: there are spiders in this game. A lot. First you have to fight them, later your green minions will ride them and gain wall climbing abilities through them.

The details put into the minions are amazing. For example all of them have names, some kind of rang based on their adventures (like elven killer or spider foe) and individual sets of armor/weaponry. The latter are picked up by them during your explorations from crates and barrels or dead enemies. Sweeping your minions over a minion item will make them pick up what they like and do a little happy dance. 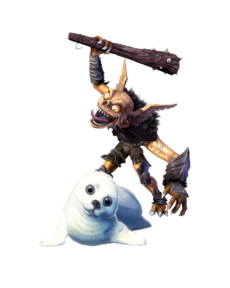 Weapons and Armor for yourself on the other hand need to be forged. To do so you need various ingredients. Most importantly the smith stones which unlock new available items. Additionally to gold and crystals you also need to sacrifice minions of certain colors. To gain new minions life force aka. souls need to be harvested by killing enemies or the innocent.

Forging is done in your dark tower in the Netherworld. The dark tower is your home base where you live with your minions and your mistresses who you'll find during the game (that part might not appeal to female gamers ;)). Besides the using the forge you also extend your magical spells and the minion barracks and meet the occasional visitor in the dark tower.

Verdict: Being the bad guy for a change is great. I caught myself with destroying things just for the fun of it several times. Despite being about a dark, mean overlord the game doesn't take it self too serious. I enjoy it a lot so far and hereby recommend it

PS: the game has a multiplayer mode as well, but I haven't even tried it, yet.