So I have an android tablet for a couple of weeks now and it's time to do a little review. Before I start let me answer the question I got most often when I said I want a tablet: What would you use it for?

The tablet is a casual consumer device to me. I use it in bed and on the couch for browsing, reading, watching YouTube and gaming. I do all those things with other devices but not as convenient as with a tablet. Oh and for reading comics in digital form a tablet is really the only choice.

I will probably also use it for navigation when on vacation and by that I mean manually reading/scrolling maps, not automatic/voice navigation. Having a larger screen makes that a bit easier than on a phone and might be able to completely replace paper based maps.

So on to the device I bought…

As you guessed from the headline I decided for a Asus EeePad Transformer TF101G. I wanted something relatively cheap but still with good hardware. The Tegra2 chipset is about one or two years old now and still quite common and considerably cheaper than the new Quadcore version in the new Transformer Prime.

There's quite some choice of Tegra2 based Android tablets available and they basically all have the same main specs: an nVidia Tegra2 graphic chipset, a 1Ghz Arm dual core CPU and a 10.1“ display. After some comparison I picked the Transformer for its compromise in weight (680g), connectability and battery lifetime. There are tablets in the same price range that are better in one of these points but are worse in the others.

Here are the quick specs of the model I bought:

Let me explain the last thing. The mentioned docking station contains a full keyboard, a second battery, an SDcard reader and two USB ports. But there are also smaller accessories available that can be connected to this port, namely an USB Adapter and a SD card reader.

Without the keyboard dock the TF101G is listed at 490 EUR at Amazon Germany, but I was able to get a nearly new one off eBay for 350 EUR.

One problem all those tablets have is that they need more power to charge than a standard USB connection provides. So proprietary chargers are needed for all these tablets. Officially the Transformer needs 15V to charge (USB provides 5) but it seems that the 12V provided by a car might suffice. Since navigation is one of the tasks I'd like to use the tablet for, I'll try to get my hands on one of these car chargers from eBay and hope they work.

The OS is pretty much stock Android which I consider a good thing. Asus just added a few (nicely done) wallpapers and widgets and some minor tweaks to the notification system. This very lightweight customization might explain why Asus is one of the first vendors providing an update to Icecream Sandwich (ICS). The tablet is currently running Android 4.0.3. 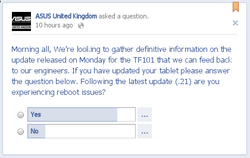 Unfortunately this is the most problematic part of this review. Since the ICS update the Transformer shows some really bad stability problems resulting in random reboots and the failure to wake up from sleep (dubbed Sleep of Death or SOD for short). Generally reboots seem to be more often when the tablet is not in use. I also had one occasion where tablet entered a reboot loop that it didn't recover from and I had to completely wipe all data. Since this factory reset the stability seems to have improved a bit.

According to this XDA thread, Asus is aware of the problems and working on a solution. Their latest patch seems not to have solved the problems for a majority of people unfortunately. I haven't received the update so I can't say anything about it.

Unlike a phone, a tablet gets shared more often than not. The Transformer isn't my pad, it's our pad. This means Kaddi and me are both using it and possibly in different ways. Unfortunately Android isn't really built for this (neither is the iPad's IOS). There is no way to have two logins to separate the user data. I wonder why Google hasn't identified multi user support as the number one solution to differentiate Android Tablets from the iPad in an area that is relevant to probably 90% of all tablet buyers… But I digress.

Many of the Google apps implement easy user switching themselves (at least in the ICS versions). You can sign into two different Google talk accounts for example and receive messages for both. When sending you can simply select what account to use. The same is true for the Gmail app. The one app that is still missing such a feature is Google Plus.

For browsers, I'd recommend to install Chrome as a second browser. Then one person can always use the stock browser and the other uses Chrome. This way cookies, logins and bookmarks are neatly separated.

What I also miss is syncing application data between my phone and the tablet. Eg. all my unlocked “Cut the Rope” levels are locked again on the tablet. But that seems to be a developer responsibility, Google provides a sync and backup service AFAIK.

One of the key selling points of the Transformer is the option to add keyboard dock. But as I said didn't buy that and don't plan to. I wanted a tablet for couch surfing and casual gaming - not replacing my laptop. The virtual keyboard has to do for me.

Having a larger virtual keyboard isn't as helpful as you'd might think. I type much faster on my mobile phone. Like on the phone, the standard android keyboard isn't bad, but not good either. Asus also installed their own Swype based keyboard which I didn't like much either. I went with what I already prefer on my Nexus: SwiftKey X. Unfortunately you have to buy the tablet version even if you bought the phone version before as both are different apps.

Since the TF101 has no vibration, there is no option to have haptic feedback when typing. This could be really useful as I tend to miss the space bar, hitting it too low when not looking. Keyboard sounds can be used of course but limit the usability in bed when your girlfriend tries to sleep

Even though the Transformer is no typing machine, I was able to write this blog post without much trouble on it

I'm generally quite happy with the quality and features of the tablet and would love to recommend it. But until the ICS bugs are fixed I can not really do so. At least Asus seems to work on a fix so one can hope.